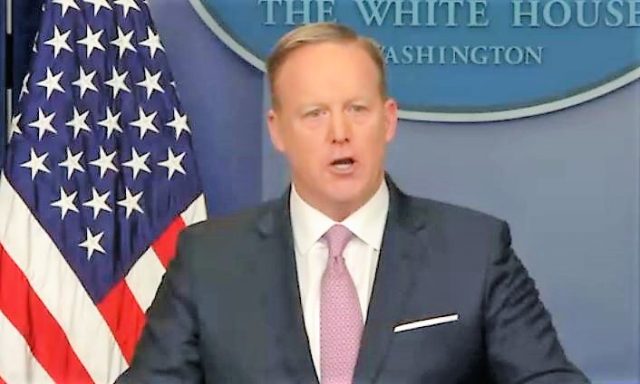 White House Press Secretary Sean Spicer is reportedly introducing a major new effort to stem the flow of leaks from the administration, going so far, according to a new report, to direct White House attorneys to engage in “random phone checks” of some West Wing staffers.

Politico reports Spicer essentially hit a boiling point last week after learning that information leaked out of a planning meeting where no more than one dozen staffers were present.  The story cites individuals present at both meetings and others who were reportedly briefed about the matter as saying Spicer told all the staffers a to place their phones on the table so a “phone check” could be conducted to clear the staffers of any wrongdoing, or leaking.   The “phone checks program” reportedly had the blessing of White House counsel Don McGahn.

Sources with knowledge of the incident say  Spicer “explicitly warned staffers that using texting apps like Confide — an encrypted and screenshot-protected messaging app that automatically deletes texts after they are sent — and Signal, another encrypted messaging system, was a violation of the Presidential Records Act.”

That warning sounds like what a high level White House aide should be telling staffers, however, there may be more to the story related to Spicer’s alleged involvement.

According to the report, Spicer then called all the individuals back to another meeting during which he is said to have ripped into them “over the number of private conversations and meetings that were showing up in unflattering news stories.” Some said the phone checks are going beyond monitoring government issued phones and have included private, personal phones and other electric devices carried by staffers.  It was also reported that Spicer specifically warned those in attendance that news of the “phone check” meeting better not leak out to the press.

All of the tension has seemingly led to a culture of fear amid the communications team inside the West Wing, according to the report.  And this latest flap certainly will not help the rocky relationship between the White House Press Corps and the Trump Administration.

The Presidential Records Act requires that the POTUS “shall take all such steps as may be necessary to assure that the activities, deliberations, decisions, and policies that reflect the performance of the President’s constitutional, statutory, or other official or ceremonial duties are adequately documented and that such records are preserved and maintained as Presidential records pursuant to the requirements of this section and other provisions of law.”

LawNewz reached out to the White House press office in an effort to reach Spicer and we will update the story when we receive a reply.