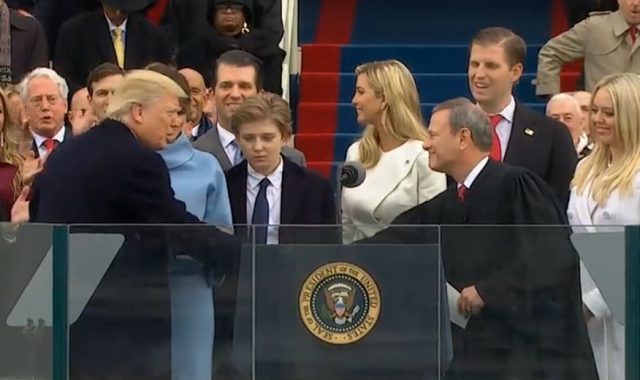 Supreme Court Chief Justice John Roberts just administered the oath of office to President Donald Trump, officially making Trump the 45th President of the United States.  The two looked very cordial as they exchanged handshakes, and Roberts offered his congratulations. But, given some of things that Trump has said about Roberts in the past, one has to wonder what was really going through Roberts’ mind. There were these from 2015 after Roberts ruled in favor of Obamacare subsidies:

If I win the presidency, my judicial appointments will do the right thing unlike Bush’s appointee John Roberts on ObamaCare.

Once again the Bush appointed Supreme Court Justice John Roberts has let us down. Jeb pushed him hard! Remember!

And these gems from 2012 when Roberts first ruled that Obamacare was constitutional, saying that the fine imposed for not having insurance could be viewed as a tax:

Justice Kennedy should be proud of himself for sticking to his principles, in light of Justice Roberts’ bullshit!

Justice John Roberts’ stupid and unreasoned decision on ObamaCare is having a positive impact on the @MittRomney (cont) http://t.co/dars0baT

After jabs like those, that handshake must have been pretty awkward.