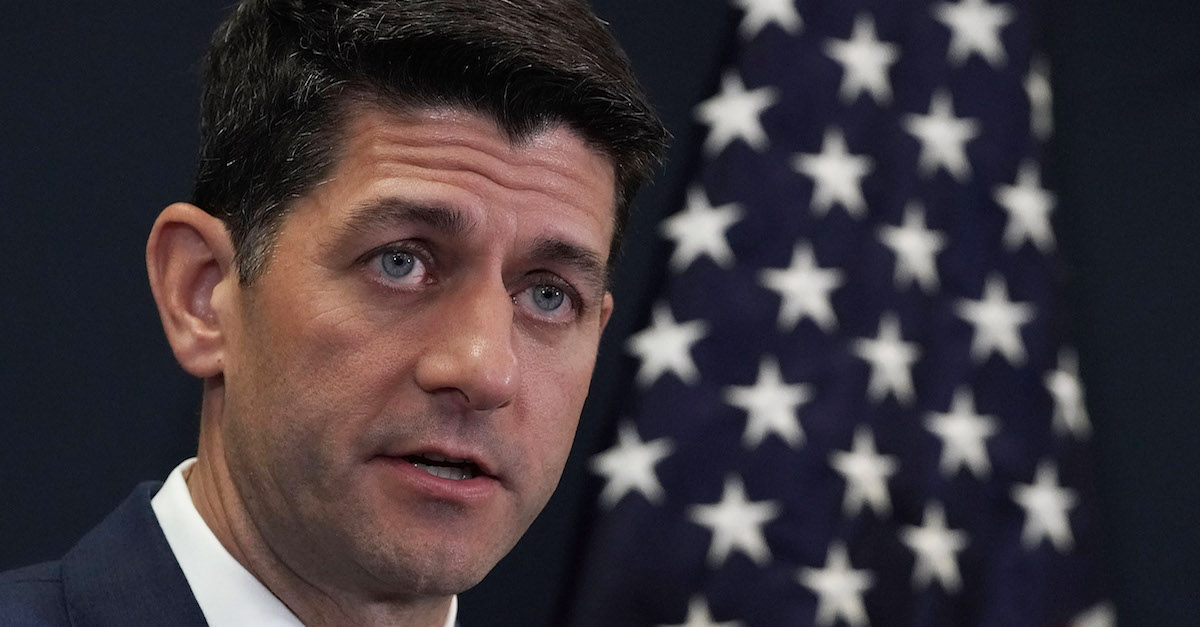 After Speaker of the House Paul Ryan (R-Wisc.) responded to President Donald Trump‘s claim that he can pardon himself, he shot down the “spygate” story that’s been pushed by the president on Twitter.

According to the New York Times, Ryan began by admitting he didn’t have technical knowledge about presidential self-pardons. He said that regardless of technicalities “obviously the answer is he shouldn’t [do that].”

“And no one is above the law,” he added.

Ryan then shifted gears and discussed Trump’s demand for “spygate” to be looked into. He said he agreed with Rep. Trey Gowdy‘s (S.C.) assessment of what the DOJ told him at a meeting.

Much was made in the last week of May when meetings took place between DOJ officials and members of Congress about the “informant” the FBI had inside the Trump campaign.

Ryan said Wednesday that Gowdy’s assessment of what was said during that meeting with the DOJ was “accurate.”

“Chairman Gowdy’s initial assessment is accurate, but we have more digging to do,” he said. Both Gowdy and Ryan were convinced enough by what the DOJ told them to say confidently that the FBI did the right thing.

In case you missed it, Gowdy said last week that Trump will be happy when he finds out what happened.

“I think when the president finds out what happened, he is going to be not just fine, he is going to be glad that we have an F.B.I. that took seriously what they heard,” Gowdy has said. “I am even more convinced that the FBI did exactly what my fellow citizens would want them to do when they got the information they got and that it has nothing to do with Donald Trump.”

Up to now on this subject, President Trump’s Twitter feed has seemed far from happy:

Wow, word seems to be coming out that the Obama FBI “SPIED ON THE TRUMP CAMPAIGN WITH AN EMBEDDED INFORMANT.” Andrew McCarthy says, “There’s probably no doubt that they had at least one confidential informant in the campaign.” If so, this is bigger than Watergate!

Reports are there was indeed at least one FBI representative implanted, for political purposes, into my campaign for president. It took place very early on, and long before the phony Russia Hoax became a “hot” Fake News story. If true – all time biggest political scandal!

“Apparently the DOJ put a Spy in the Trump Campaign. This has never been done before and by any means necessary, they are out to frame Donald Trump for crimes he didn’t commit.” David Asman @LouDobbs @GreggJarrett Really bad stuff!

…Follow the money! The spy was there early in the campaign and yet never reported Collusion with Russia, because there was no Collusion. He was only there to spy for political reasons and to help Crooked Hillary win – just like they did to Bernie Sanders, who got duped!

Look how things have turned around on the Criminal Deep State. They go after Phony Collusion with Russia, a made up Scam, and end up getting caught in a major SPY scandal the likes of which this country may never have seen before! What goes around, comes around!

SPYGATE could be one of the biggest political scandals in history!

Clapper has now admitted that there was Spying in my campaign. Large dollars were paid to the Spy, far beyond normal. Starting to look like one of the biggest political scandals in U.S. history. SPYGATE – a terrible thing!

Not surprisingly, the GREAT Men & Women of the FBI are starting to speak out against Comey, McCabe and all of the political corruption and poor leadership found within the top ranks of the FBI. Comey was a terrible and corrupt leader who inflicted great pain on the FBI! #SPYGATE

The Democrats are now alluding to the the concept that having an Informant placed in an opposing party’s campaign is different than having a Spy, as illegal as that may be. But what about an “Informant” who is paid a fortune and who “sets up” way earlier than the Russian Hoax?

Can anyone even imagine having Spies placed in a competing campaign, by the people and party in absolute power, for the sole purpose of political advantage and gain? And to think that the party in question, even with the expenditure of far more money, LOST!

“Everyone knows there was a Spy, and in fact the people who were involved in the Spying are admitting that there was a Spy…Widespread Spying involving multiple people.” Mollie Hemingway, The Federalist Senior Editor But the corrupt Mainstream Media hates this monster story!

With Spies, or “Informants” as the Democrats like to call them because it sounds less sinister (but it’s not), all over my campaign, even from a very early date, why didn’t the crooked highest levels of the FBI or “Justice” contact me to tell me of the phony Russia problem?

This whole Russia Probe is Rigged. Just an excuse as to why the Dems and Crooked Hillary lost the Election and States that haven’t been lost in decades. 13 Angry Democrats, and all Dems if you include the people who worked for Obama for 8 years. #SPYGATE & CONFLICTS OF INTEREST!

“The President deserves some answers.” @FoxNews in discussing “SPYGATE.”

The corrupt Mainstream Media is working overtime not to mention the infiltration of people, Spies (Informants), into my campaign! Surveillance much?

Wow, Strzok-Page, the incompetent & corrupt FBI lovers, have texts referring to a counter-intelligence operation into the Trump Campaign dating way back to December, 2015. SPYGATE is in full force! Is the Mainstream Media interested yet? Big stuff!

Great interview by @LouDobbs with Chris Farrell of Judicial Watch concerning the governments counter-intelligence operation into the Trump Campaign. SPYGATE at the highest level. Who would believe?

Chris Farrell, Judicial Watch. “They were running an operation to undermine a candidate for President of the U.S. These are all violations of law. This is intelligence tradecraft to steer an election. There’s nothing more grave when it comes to abuse of our intelligence system…