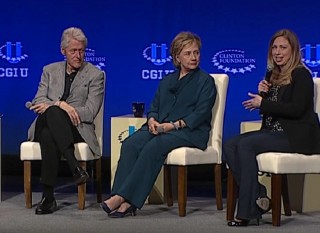 The Clinton campaign last Thursday announced they would no longer accept certain foreign and corporate donations if Hillary Clinton was elected president.

The Associated Press was first to report on the announcement late on Thursday and what followed was the typical fawning media coverage about how the Clintons finally got out ahead of a major issue that has dogged the campaign almost as much as the email stories.

While the majority of the Beltway Press simply took Team Clinton at their word, some of the more experienced, or level headed folks, rightfully viewed the announcement with skepticism.  A wait and see approach is often wise with any political leaders, but it is especially necessary with the Clintons.

One need not look further than how Clinton and her team treated the “ethics pledge” she signed prior to her appointment as Secretary of State.  As this commentator wrote last week, records obtained through FOIA lawsuits brought by Vice News, Judicial Watch and other outlets unequivocally show the “ethics pledge” was essentially meaningless.

Meredith McGehee, policy director for the nonpartisan Campaign Legal Center,was asked about the pledge earlier this month by Politico.  The first thing McGehee noticed was the language of the pledge itself, saying it is “not surprisingly, very lawyerly,” which provides Clinton with an out to say maybe she technically did not violate the black letter of the pledge.

She was then asked whether there was any question that Hillary and/or her aides violated the spirit of the pledge.

“Whether she or her aides have violated the spirit of the pledge … yeah, of course they have,” McGehee told Politico. “The notion of continuing contact between the Clinton Foundation and the State Department — that was not supposed to happen.”

Given this sordid history, it should come as no surprise that almost as soon as the Clinton campaign made the latest promise to stop taking donations (less than 24 hours, actually,) they were already walking it back.  This story, of course, received nowhere near the coverage as the original announcement and that was likely what team Clinton was counting on all along.

It was reported on Thursday that the Clinton Foundation would no longer receive donations from foreigners or corporations if Clinton wins the election in November, an effort to defuse criticism that donors to the globe-straddling charity might inappropriately seek White House favors in return.

But representatives of the charities confirmed on Friday that the new guidelines would only apply to a small portion of the foundation’s activities, including its work on climate change and some of its work on economic development (emphasis added).

So there you have it, this “ban” on corporate and foreign donations really only applies to a small number of number of the foundation’s projects.

In fact, the largest program of the Clinton Foundation, Clinton Health Access Initiative (CHAI) (the family philanthropy), will still be accepting foreign donations as of now, according to the report.

“The CHAI Board will be meeting soon to determine its next steps,” a spokesman reportedly told Reuters.

The news outlet also points out how the foreign arm of the Clinton Foundation, the Clinton Giustra Enterprise Partnership (Canada), or CGEP, is also not subject to the Foundation’s latest announcement on donation limitations.

When questioned about the arrangement, should Hillary win the presidency, Frank Giustra reportedly said “we plan to spin CGEP into an independent entity to continue this important work.  President Clinton and I believe it is important that we continue the work of alleviating poverty around the world.”

Giustra did not, however, provide any additional details – including anything about the role former President Bill Clinton might have under the hypothetical arrangement.

These reports indicate the announcement about donation policy changes at the Clinton Foundation was nothing more than typical  Clinton campaign lip service to temporarily get the press off their back.  The Clintons clearly have no plans of truly shutting down the family foundation should Hillary win the White House. One way or another they will keep it fully operational, accusations of the potential appearance of (or real) influence peddling be damned.