Nancy Grace Goes Bananas on ‘Making a Murderer’: ‘His Blood is Found in Six Spots’ 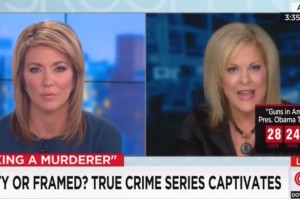 Nancy Grace ripped Netflix’s breakout hit Making a Murderer Wednesday on CNN. Grace made it perfectly clear that she believes the documentary’s subject Steven Avery was guilty of killing photojournalist Teresa Halbach, and that the show represents “bias in the media.” Grace didn’t buy the doc’s allegations that Avery may have been framed for the murder as retribution for his filing a lawsuit against the police and prosecutors after he served 18 years for a rape he did not commit. She thinks Avery is guilty because, well, probably in part because she’s Nancy Grace but she also focused on the evidence:

“Her blood is found on a bullet in his garage…His blood was found in six spots in her vehicle.” To her, the most important piece of evidence was Halbach’s “bones, her charred bones, found intertwined in steel belts of tires out behind his auto salvage lot.”

The doc has led many to call for a new trial for Avery and even led to some harassing the prosecutor on social media.

Watch the video above, via CNN.
–