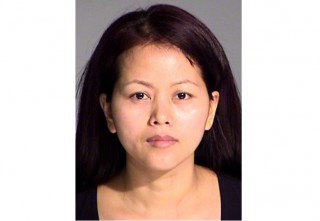 A Burmese refugee living in Indiana was arrested for felony battery and neglect, after a teacher noticed red welts on her 7-year-old son’s back. Kin Park Thaing is accused of beating the child with a coat hanger, but she claims that her method is in line with her religious beliefs, and should thus be protected by the state’s Religious Freedom Restoration Act.

“I was worried for my son’s salvation with God after he dies,” Thaing said, according to court documents obtained by IndyStar. She quoted scripture, saying, “Do not withhold discipline from a child; if you strike him with a rod, he will not die. If you strike him with the rod, you will save his soul from Sheol.”

In addition to the RFRA, Thaing’s attorney, Greg Bowes, is using legal precedent to argue that the punishment was allowed. Bowes cited a 2008 Indiana Supreme Court decision where the court overturned a mother’s conviction for beating her son with what she said was a belt and the child said was an electrical cord. The court ruled it didn’t matter what it was, and that parents have a right to discipline their children with reasonable force, if they believe it is necessary to prevent misconduct. Marion County Deputy Prosecutor Matt Savage argued in a court filing that the force Thaing used against her son was beyond reasonable, and “beyond these religious instructions she cites from the Bible.”

The alleged abuse took place in February, when, according to court documents, Thaing said she was trying to keep her son from hurting her 3-year-old daughter. Thaing said she hit both kids with a plastic hanger and then instructed them to pray. Two days later, a teacher noticed that the boy reacted when she patted him on the back, and that’s when she saw bruises. The teacher notified police and child welfare.

The child was taken to a hospital, where a doctor discovered 36 marks on his back, thigh, and arm. Both children were taken by child welfare officials and Thaing was arrested.

Thaing claimed that cultural differences were also an issue, and that this method of discipline was more common in Burma. However, she said in an affidavit, “I now know that there are effective ways to teach my children good behavior without using physical punishment.”