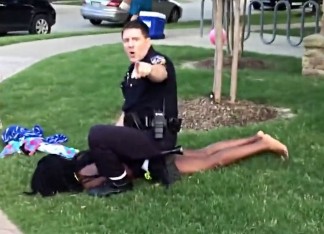 A Grand Jury in Collin County, TX declined to indict a former McKinney police officer for his involvement in breaking up an out of control neighborhood pool party last year.

The McKinney pool party incident briefly gained national attention last summer after a video showed former MicKinney Police Officer Eric Casebolt detaining an African-American teenager wearing only a bikini swimsuit.  Casebolt was also seen on video appearing to draw his service weapon on a group of males who rushed up behind him while he was attempting to detain the female.

Casebolt voluntarily resigned from the department shortly after the incident.  Last summer, through his attorney, he also acknowledged letting his emotions get the best of him that evening.

“He does recognize that his emotions got the best of him,” attorney Jane Bishkin said last year, according to NPR. “The prior suicide calls [before arriving at the pool] put him in an emotional place that he would have preferred not to have been in.”

According to Fox 4 News, the incident was investigated by the Texas Rangers and the findings of the investigation were turned over to the Collin County District Attorney’s Office.  A grand jury on Thursday decided not to indict Casebolt, returning a “No-Bill.”

Residents reportedly called the police to the pool after an unauthorized party in a nearby park got out of control and individuals started jumping the fence into the private neighborhood pool area.

“We’re glad that the system worked in his favor in this case,” Casebolt’s attorney, Tom Mills, told the Dallas Morning News.

Mills spoke about when he informed Casebolt of the Grand Jury’s decision, saying, “He was relieved and glad that the Rangers had done the thorough investigation that they did.”

Mills added that it would not surprise him if Casebolt applied for another policing job now that this is all behind him.

As for the teenager involved in the incident, her attorney said they plan to sue the City of McKinney over the incident.

“We currently live in a time in which the public servants who are hired to protect and serve are not required to uphold the very law they are sworn to enforce,” attorney Kim T. Cole said in a prepared statement obtained by the Dallas Morning News. “The message is clear. Police are above the law. This must change.”

The McKinney Police Department released its own statement on its website after the decision that reads, in part:

The McKinney Police Department will be holding a community forum at the Old Settler’s Recreation Center 1201 E. Louisiana Street, McKinney, Texas 75069 on Monday June 27 at 6:30 p.m. Several community leaders involved with the Police Chief’s Advisory Council will be on hand to speak at the meeting focusing on the theme: Moving Forward, Strengthening Police and Community Relationships. All McKinney residents are invited to attend this meeting.

Fox 4 News reports that at least one activist group, Next Generation Action Network, claims to be “outraged” over the Grand Jury decision and plans to hold a protest somewhere in the area within a week.