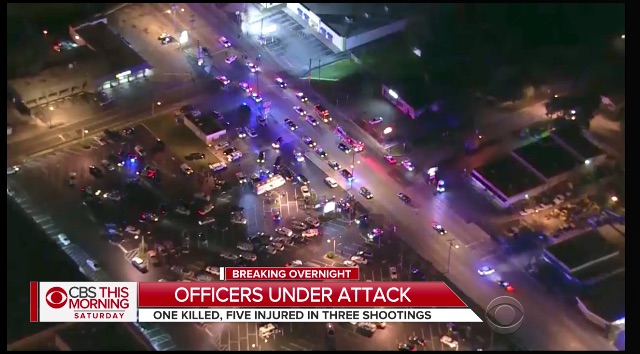 KISSIMMEE, Fla. (AP) — A suspect in the fatal shooting of two police officers in Florida was arrested in a bar several hours after the attack, authorities said Saturday.

Everett Miller faces a charge of first-degree murder for the killing of Officer Matthew Baxter, who died Friday night after the attack. Sgt. Sam Howard died Saturday afternoon, and authorities hadn’t yet said what charges he could face for that.

During a patrol late Friday of a neighborhood with a history of drug activity, Baxter was “checking out” three people, including Miller, when the officer got into a scuffle with Miller. Howard, his sergeant, responded as backup, said Kissimmee Police Chief Jeff O’Dell. Kissimmee is located south of the theme park hub of Orlando, Florida.

The officers didn’t have an opportunity to return fire. They weren’t wearing body cameras.

Sheriff’s deputies with a neighboring law enforcement agency later tracked Miller down to a bar and approached him. Miller started reaching toward his waistband when the deputies tackled and subdued him, O’Dell said.

The found a handgun and revolver on him.

“They were extremely brave and heroic actions taken by the deputies,” O’Dell said.

Authorities originally said they believed there were four suspects, but the chief said Saturday that no other arrests are anticipated.

Miller, 45, was a Marine veteran and was recently involuntarily committed for a mental evaluation by the Osceola County Sheriff’s Office. The early stages of the investigation shows that Miller had made threats to law enforcement on Facebook, O’Dell said.

Baxter, 27, had been with the Kissimmee Police Department for three years. He was married to another Kissimmee police officer and they have four children.

Howard, 36, has served with the Kissimmee Police Department for 10 years. He and his wife have one child, O’Dell said.

Separately, other two officers were injured late Friday in Jacksonville, Florida, after police responded to reports of an attempted suicide at a home where the mother of his child, their 19-month-old toddler, the woman’s mother and a family friend were thought to be in danger. One of the officers was shot in both hands and the other was shot in the stomach.

Jacksonville Sheriff Mike Williams said Saturday that officers Michael Fox and Kevin Jarrell are in stable condition following Friday night’s confrontation with an armed Derrick Brabham, who was killed by the officers.

In Pennsylvania, two state troopers were shot and a suspect killed outside a small-town store south of Pittsburgh on Friday night.

President Trump tweeted early Saturday that his thoughts and prayers were with the Kissimmee Police Department. “We are with you!” he said.

Florida Gov. Rick Scott tweeted he was heartbroken by the news of Baxter’s death and was praying for a quick recovery for Howard.