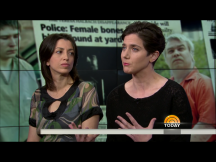 Making A Murderer has officially reached zeitgeist status. When Laura Ricciardi and Moira Demos set out to make the explosive hit-docuseries, they probably didn’t anticipate editorial or media backlash. Now, they may be facing legal backlash as well.

Several outlying characters in the documentary are now stepping forward, accusing the filmmakers of using their likeness without their permission. At least three peripheral subjects were unaware their likenesses or personal images would be used in the series.

One mini-major player is Penny Beerntsen, the 1985 rape victim that falsely identified Steven Avery as her attacker. Beerntsen told the New Yorker that she was unaware that pictures taken by the police as evidence after the attack would be used in the series. The New Yorker‘s Kathryn Schulz quotes Beerntsen as saying, “I don’t mind looking at it, but my children should not have to relive that…. And everything we’re dealing with, the Halbachs are dealing with a thousandfold.”

Unfortunately, government images are not copyrightable and State records are available to the public. Once an individual grants permissions to a filmmakers, they no longer have a say in how and when that image or footage is used — duress may be an exception. While there may be ethics concerns, or journalistic judgments to make, that does not prohibit the filmmakers from using media they have appropriately received consent for.

Avery’s ex-fiancée, Jodi Stachowski who claims he physically and verbally abused her is now learning that the hard way. Stachowski reportedly told an HLN producer, “I asked [Laura] and Moira not to even use anything with me in it…. Because I told her it was all lies.”

In response to Stachowski’s claims, a representative for Ricciardi and Demos told Rolling Stone, “the filmmakers have material releases for all of the photos and that the claim is false.”

The context of using someone’s likeness plays a key role in whether copyright infringement has taken place, but, generally, individuals do not have an absolute ownership right in their names or likenesses. These rights are often known as one’s “right of privacy” or “right of publicity.”

As the series was released by Netflix, it’s more than likely that their lawyers took the necessary steps to make sure all rights were secured. This is known as securing “chain of title” in the film industry.