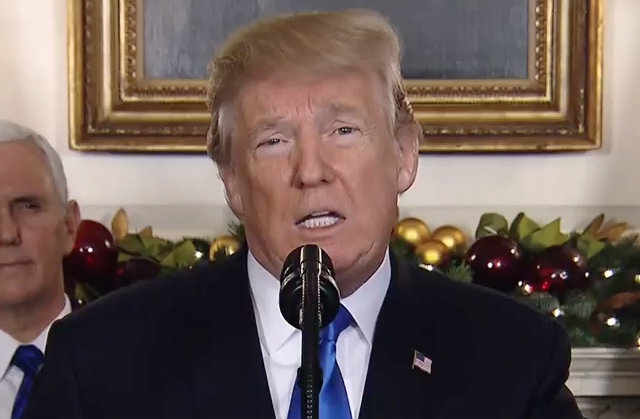 There’s been a reckoning these past few months when it comes to powerful men accused of sexual misconduct. Now, according to a poll released by Quinnipiac University on Wednesday, most Americans think it’s the president’s turn to face official scrutiny. In fact, 70 percent of respondents thought the U.S. Congress should investigate Donald Trump for the sexual harassment allegations against him. 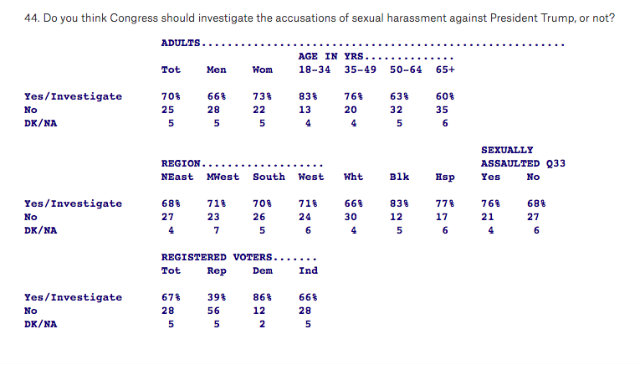 There’s a clear pattern when it comes to age, race, and politics, however. Younger people are way more likely to say yes. The older they are, the more likely respondents would say no. Nonetheless, the majority of every age group said a probe should occur. White, black, and Hispanic people were the only racial/ethnic groups named in the poll. Among them, white respondents were least likely to call for an investigation, black people the most likely. Results are the most striking when it comes to politics. Among registered voters, only 39 percent of Republicans called for an investigation. Compare that to 86 percent of Democrats, and 66 percent of Independents.

Also note the reference to SEXUALLY ASSAULTED Q33. Quinnipiac asked respondents if they’d been sexual assaulted, “meaning someone touched you in an inappropriate, sexual manner without your consent, or not.” 32 percent of people answered yes to that question (47 percent women, 17 percent men). This group was eight percent more likely to call for an investigation into Trump.

This is just a poll, but it’s within the context of a bigger cultural shift. Numerous high-profile men have been accused of sexual misconduct on the record. Harvey Weinstein, Kevin Spacey, Charlie Rose, Matt Lauer, and multiple politicians like GOP Senate Candidate Roy Moore,and Sen. Al Franken (D-Minnesota).

So far, Republicans accused of misconduct are refusing to budge. In the campaign, Trump denied allegations against him, and promised to sue the women after the election (he didn’t). He won the election anyway. Moore, who also denied allegations against him, continues to run for a U.S. Senate seat in Alabama. The Republican National Committee at first distanced themselves from him, but they’re now putting money in his campaign again, apparently alienating Sen. Ben Sasse (R-Nebraska). Meanwhile, Rep. John Conyers (D-Michigan) resigned amid harassment allegations, and as of Wednesday, 26 Democratic Senators are calling for Franken to step down.

With that in mind, politics would likely get in the way of any hypothetical probe against the president. Republicans command a narrow majority in both houses of Congress, and if Quinnipiac’s findings reflect real life, then a majority of GOP constituents wouldn’t leverage their elected officials to run an investigation into Trump.

Quinnipiac said they collected the information from Nov. 29 to Dec. 4, contacting 1,747 across the nation.