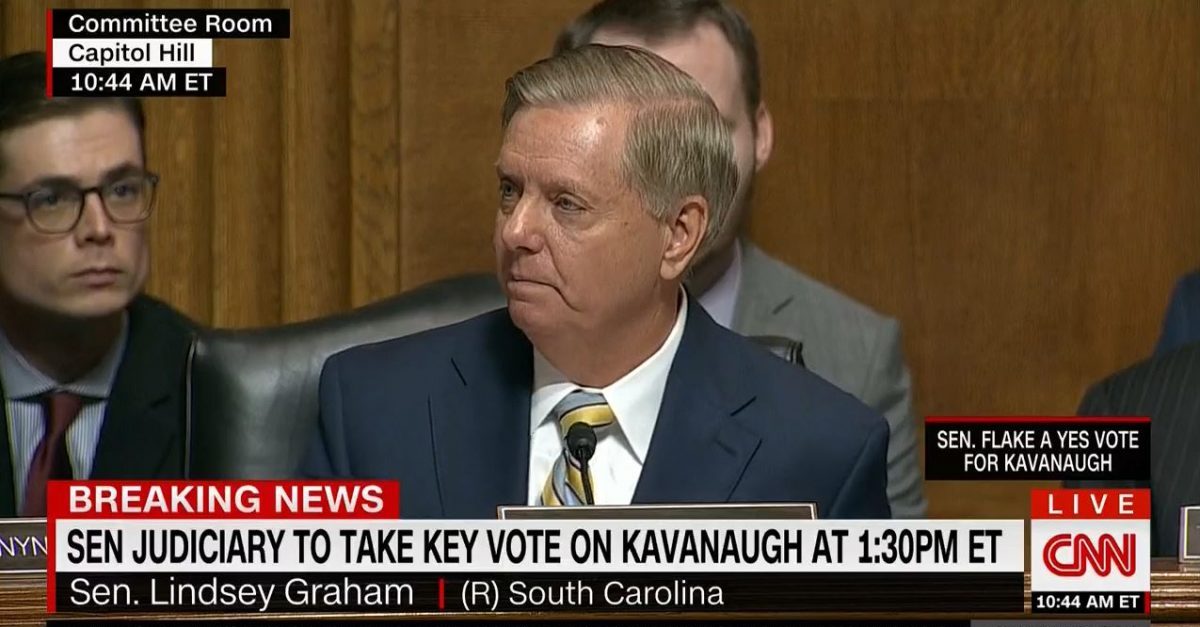 In a press release issued Tuesday afternoon, the Palmetto State’s senior senator said that if Kavanaugh’s nomination were to fail in front of the full U.S. Senate, President Donald Trump should just go right ahead and nominate him again.

The statement from Graham’s office begins with a few notes of sympathy and respect for the highly controversial and increasingly unpopular Supreme Court nominee.

“I can only imagine how awful this entire process has been for Judge Kavanaugh and his family,” the release begins, “I truly admire Judge Kavanaugh’s determination — along with that of his family — to not quit in the face of the outrageous accusations that have been leveled against him.”

Graham also offered his GOP colleagues a bit of a pep talk, urging them to stand strong in spite of the various sexual assault, perjury and witness tampering allegations against the controversial D.C. Circuit Court judge.

“I would again ask every senator who believes Judge Kavanaugh is a highly qualified, capable nominee to the Supreme Court to not quit on him,” Graham’s statement reads, “It is incredibly important we do not legitimize these smears and attempts at character assassination for the good of the Court, the future of the Senate, and the character of our nation.”

Then Graham makes the highly unusual suggestion to re-nominate Kavanaugh after his potential defeat:

The press release concludes by fleshing out Graham’s argument in political terms–directly keyed to the upcoming midterm elections and the idea of a referendum on Kavanaugh himself.

Graham’s release notes, “The midterm elections are only 35 days away and a new group of senators may view Judge Kavanaugh’s nomination very differently after hearing from the voters in their states.”

While decidedly unusual, the prospect of re-nominating a defeated Supreme Court nominee isn’t entirely without precedent in the nation’s history–you’d just have to go back pretty far to find it.

Law&Crime reached out to the Senate Historical Society for the answer.

Only 12 nominees have been defeated–rejected–by the full U.S. Senate. And out of those 12 rejected nominees, only once in American history has a nomination been re-submitted after the fact.

That ignominious honor belongs to John C. Spencer, who was nominated to serve as an associate justice on the nation’s high court by President John Tyler in January of 1844. Spencer was rejected by the Senate just weeks later.

According to the Senate Historical Office, Tyler then re-nominated Spencer on June 17 of the same year–but the nominee withdrew his nomination later that same day.