Lawsuit: Chris Brown Assaulted Woman Who Tried to Take Picture of Him 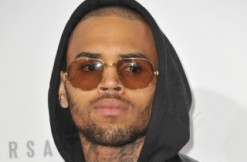 Singer Chris Brown has a history of assault allegations, and that continues with a civil suit filed Wednesday.

Liziane Gutierrez says Brown invited her to a January 2 party in a hotel room, but he apparently turned sour when she tried to take a picture of him. Private security apparently kicked her out after her phone was taken. According to police, Gutierrez said she came back about an hour later and argued with Brown. The singer allegedly then hit her. In a statement, Las Vegas cops said she “appeared to have minor injuries sustained as a result of a battery.”

There was a potential case for misdemeanor battery and theft, but authorities dropped the case January 25, citing insufficient evidence.

You can see Brown deny the allegations in this January 3 post via The Shade Room Inc. Fair warning, he curses a lot:

He was convicted in 2009 for assaulting singer and ex-girlfriend, Rihanna.

Now Gutierrez wants damages, and money for court fees. To be specific, she’s citing defamation, emotional distress, mental anguish as well as pain and suffering, according to court documents cited by Review Journal. She reportedly hasn’t gotten her phone back.