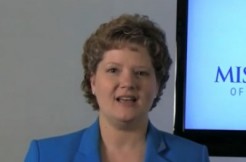 When supporting a potential ballot measure that’d grant personhood rights to unborn fetuses, a Missouri legislator said something that might be a little divisive.

“It is not up to us to say, ‘No, just because there was a rape, they [unborn fetuses] cannot exist,’” Rep. Tila Hubrecht, R-Dexter said at a Tuesday debate for the Missouri House of Representatives, according to the St. Louis Post-Dispatch. “Sometimes bad things happen. Horrible things. But sometimes God can give us a silver lining through the birth of a child.” Emphasis added.

The state House voted 112-36 on Tuesday to okay the ballot measure. Its text states it would “protect pregnant women and unborn children by recognizing that an unborn child is a person with a right to life which cannot be deprived by state or private action without due process and equal protection of law,” according to the Dispatch. It still needs Senate approval before it makes it to the election ballot in November.

Opponents argued that the measure would outlaw contraception, abortions after a rape, and abortions to save the mother’s life.

“This bill doesn’t just take the issue over the edge of the cliff,” Rep. Lauren Arther, D-Kansas said, according to the Dispatch. “It rockets the issue into outer space.”

According to the Dispatch, the measure’s sponsor, Rep. Mike Moon, R-Ash Grove, said that by establishing a fetus’ personhood, it would push the U.S. Supreme Court to reevaluate 1973’s Roe v. Wade, which established that women had the right to abortions.

Missouri, like the rest of the nation, is scheduled to hold general elections on Tuesday, Nov. 8.

[screengrab via Missouri Chamber of Commerce and Industry]
–