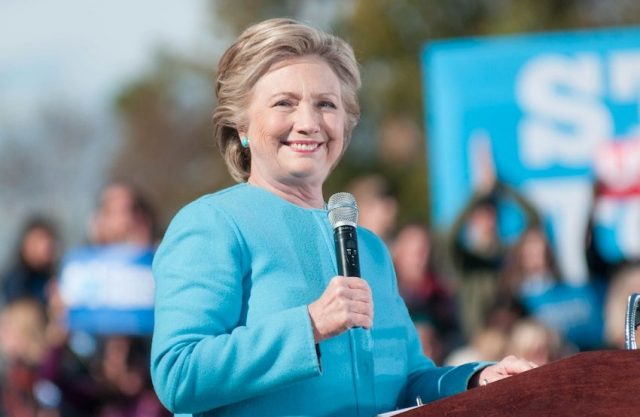 Hillary Clinton announced on Monday that she is launching a new organization, “Onward Together.” The group, according to its website, aims to get people “to organize, get involved, and run for office,” in order to “advance progressive values and work to build a brighter future for generations to come.”

None of that sounds surprising. Considering that Clinton has been in the political sphere for decades, it makes sense that she plans to continue in some capacity. But while in the past, Clinton has come out against anonymous political donations, that’s exactly what some fear she’ll be encouraging with the new group.

Onward Together is registered as a 501(c)(4) non-profit organization. That means that while donations aren’t tax-deductible, they can be anonymous, and have been criticized for an increase in political “dark money.”

Clinton’s own personal website speaks out against “secret, unaccountable money in politics,” saying that “voters won’t believe Washington will work for them unless we take on the power and stranglehold that wealthy interests have over our political system.”

The Campaign Legal Center (CLC), a non-partisan group that tackles election law issues, called Clinton out on her new venture’s potential fundraising. Larry Noble, the senior director of regulatory reform programs and general counsel for the CLC, said in a statement obtained by LawNewz.com, “It is disappointing that Sec. Hillary Clinton – who ran on a platform to “end secret, unaccountable money in politics” – would break the spirit of her own promise by starting a new dark money group to allow her to raise unlimited funds from secret donors.”

Noble said that voters should know where politicians are getting their money in order to know if they’re answering to the masses or wealthy individuals. “Clinton’s group is following a dangerous path that could further open the floodgates to even more unaccountable money in politics,” he said.

LawNewz.com reached out to Onward Together for comment regarding criticism and accusations of encouraging dark money in politics, but we have not received a response.