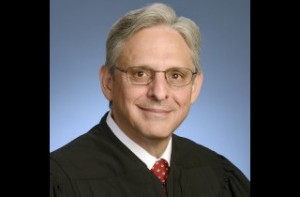 Predictably, Senate Republicans came down hard against President Barack Obama‘s choice to tap Merrick Garland, chief judge of the U.S. Court of Appeals for the District of Columbia Circuit, repeating their assertion that they would block any Obama nominee. While it might seem implausible, there is a potential scenario in which Republicans would be tripping over themselves trying to confirm Garland as quickly as possible.

After the president made his announcement, Senate Majority Leader Mitch McConnell reiterated his familiar objections, which he had begun voicing within an hour of the Supreme Court Justice Antonin Scalia’s death, that the vacant seat should not be filled until after the election, saying that their objection was “about is a principle and not a person.” In other words, it doesn’t matter who the president nominates. Garland’s widely considered to be centrist with a CV worthy of the honor, but for these purposes, he’s a political MacGuffin, merely a means to draw out Republican indignation at the president for having the temerity to nominate someone.

Meghan McCain accused the president of “sacrific[ing] this man’s career simply for his own political benefit,” while liberals lamented the missed opportunity to elevate a progressive. Sen. Orrin Hatch has sought to diminish his past praise of Garland’s record, citing the “toxic environment” and “politicizing” of the Court as his justification for blocking any possible confirmation. “It isn’t the person we’re against,” he told Fox’s Neil Cavuto in an interview Wednesday. “It’s the system.”

In short, nobody seems particularly willing to take at face value the president’s selection of a moderate, eminently qualified jurist to fill an empty seat on our nation’s highest court.

Despite their recalcitrance now, believe it or not, there could be one scenario where Republicans are racing to confirm Garland to the Supreme Court. (My colleague Tommy Christopher proposed an alternate scenario in which Senate Republicans would cave upon hearing six magic words.)

If a Democrat wins in November and if the party manages to flip the Senate, it’s conceivable that the Senate Republicans would be tripping over themselves to confirm Garland during a lame-duck session rather than risk a far more progressive nominee making it to the bench courtesy of President Clinton. (And wouldn’t it be a mightily ironic and comical development, worthy of House of Cards, if suddenly Senate Democrats were thrown into a mad scramble doing everything in their power to obstruct Garland’s confirmation, in the hopes of holding out for a more liberal option.)

During his Wednesday afternoon interview with the Utah Senator, Cavuto asked Hatch if Senate Republicans would “rue the day that they missed a chance at a moderate pick for the court.” Hatch deflected the question, saying the issue only spotlighted how important it was for voters to support the Republican nominee, “whoever that may be.”

A lame duck confirmation is not entirely beyond the realm of plausibility. Linda Greenhouse, who covered the Supreme Court for the New York Times from 1978 to 2008, told Mediaite that “this is such an unprecedented and volatile situation that indeed anything is possible,” and noted that Justice Stephen Breyer was confirmed to the First Circuit during a lame duck session the month after Jimmy Carter, who nominated him, had been voted out.

Politico’s John Bresnahan quoted Sen. Jeff Flake (R-AZ), who sits on the Senate Judiciary Committee, as admitting that “it may be a good move” to confirm Garland during a lame-duck session if Clinton won the presidency. Right Wing Watch’s Brian Tashman made the withering observation that Flake’s remarks evinced a logic that Republicans were unwilling to vote on a nominee during Obama’s last year, but would be fine doing so during his last month.

After all the hand-wringing about “letting the people have a voice” in choosing the next Justice, such an about-face from Republicans might come across as hypocritical. But an imminent Clinton presidency would evince a pretty loud voice.