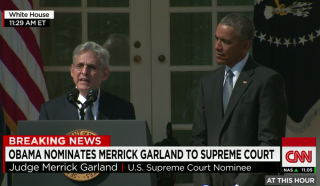 Poor Judge Merrick Garland. He’s been on the short list for the U.S. Supreme Court for years. In fact, many believed he had a pretty good chance of replacing Justice Paul Stevens back in 2010, but the President opted for Justice Elena Kagan instead.  There is no question that Garland is immensely qualified by any definition of that word. He attended Harvard Law School, and now serves as the Chief Judge for arguably the second most influential court in the land, the United States Court of Appeals for the District of Columbia Circuit. He was nominated to the D.C. circuit back in 1995 by President Bill Clinton and is considered a judicial moderate. He’s also respected and liked by his colleagues. In any other year, he might be overwhelmingly confirmed by the U.S. Senate. In fact, some Senate Republicans might even be overjoyed that Obama picked a moderate. This is not any year and there is a very good chance Judge Merrick Garland becomes a historical footnote.

Senate Republicans are ready for a huge fight, one where they do not back down. Just hours after Justice Scalia died in his sleep, the Republican effort to thwart any Obama nomination began in full force. “This nomination will be determined by whoever wins the presidency in the polls,” Sen. Mitch McConnell said. “I agree with the Judiciary Committee’s recommendation that we not have hearings. In short, there will not be action taken.”

Its also interesting to have followed the leaks about the nominee leading up to today’s announcement. Judge Sri Sirinivasan was always considered the odds on favorite. Those leaks aren’t arbitrary and any White House correspondent will tell you they usually come from the White House. In fact, The Washington Times reported that Sirinivasan had more than a 50% chance of being picked. Reuters even mistakenly announced this morning that he was the pick.

Please see our correction. We are deleting our incorrect tweet. https://t.co/QrOgD9HKKl https://t.co/AuJ7mz0kO1

So why did Obama forgo picking a young 49 year old “diverse” candidate like Sirinivasan to pick a 63-year old white male who is much later in his career? One has to speculate that Obama may have even been doing a favor to Sirinivasan by not nominating him. He knows that any nominee will inevitably become a political piñata with little to no chance of survival. Thus, Mr. Garland’s legacy will always be linked with the 2016 political fight over the Court.  If President Obama really thought his Supreme Court nominee had a shot, you have to believe that he would have picked someone more like Sirinivasan who could lead to even more political pressure on conservatives to approve. Remember, Sirinivasan was just confirmed for the D.C. circuit in 2013 by a vote of 97-0. That’s quite rare. Back in 1997 when Garland was confirmed to the D.C. circuit, it was far more controversial with a vote of 76 to 23. Some key leadership Republicans voted against him, including Senator Mitch McConnell and Senate Judiciary Committee Chairman Chuck Grassley.  Furthermore, the last time that a nominee as old as Garland was confirmed was back in 1971. Justice Louis Powell was 64 years old when he was nominated by President Nixon. It just doesn’t make political sense and this has to be viewed through a political prism.

“There is no question from the Democratic perspective that Garland is a highly qualified moderate with some past Republican support. With that said, there were other (younger) candidates President Obama was considering who either had more passionate support in discrete communities and/or more unambiguous support from both sides of the political aisle. Judge Garland simply was not the pick to force Republicans hand in any substantial way and think it clear he will not be confirmed by the Senate, if his nomination is reviewed at all,” LawNewz.com’s founder Dan Abrams said.

Judge Garland’s only real chance of being confirmed? If President Hillary Clinton decided to honor the nomination. President Obama and Secretary Clinton are close, but not that close.