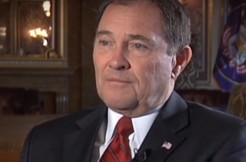 Utah Gov. Gary Herbert signed a bill on Monday mandating anesthesia for abortions at the 20th week of pregnancy or later.

“Rather than get into the abortion debate, I guess the question is, if we’re going to have abortion, what is the most humane way to do it?” the governor told reporters during a legislative session.

The move is intended to eliminate “any pain that may be caused to an unborn child,” a spokesperson for Herbert said in a statement reported by Reuters.

Bill sponsor and State Senator Curt Bramble argued that fetuses can feel pain around the 20th week of pregnancy, while critics say that hasn’t been proven.

“I mean, we have fetal medical specialists speaking and they were discounted by a citizen who said, ‘I read it on the Internet and therefore it must be true,’” Karrie Galloway, executive director of Planned Parenthood in the state, told The Salt Lake Tribune. “That’s how we do policy here in Utah.”

She claimed the new law has the government butting in women’s business.

“You’re talking to a women who is being told that Curt Bramble, a CPA, is better at practicing medicine than the physician I haven chosen,” Galloway said. “That’s what’s infuriating.”

This new law won’t affect many. Only 17 women had abortions at the 20th week in 2014, according to The Salt Lake Tribune. On top of that, state law prohibits the procedure after the fetus is viable, which tends to happen as early as 22 weeks.

Sen. Bramble originally planned to attempt banning abortions after 20 weeks, but stopped after being told it would be unconstitutional, The Salt Lake Tribune reports.