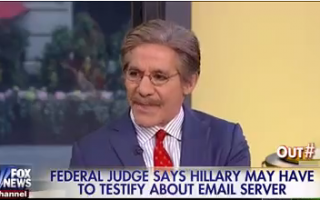 Geraldo Rivera was on Fox News’s Outnumbered Thursday afternoon, discussing the recent claim by the Romanian hacker known as Guccifer who claims he hacked into Hillary Clinton’s private email server on more than one occasion. Guccifer, real name Marcel Lehel Lazar, is in jail, charged with wire fraud, cyberstalking, identify theft, unauthorized access to computers, and obstruction of justice. He was extradited to New York in March, as the FBI was reportedly in the middle of investigating Clinton’s email server. Guccifer told Fox News that he easily hacked Clinton’s emails, and described how he did it.

Rivera doesn’t believe any of it. “I think it’s a bogus story,” he said, saying that the hacker hasn’t provided any evidence that he actually hacked Clinton’s email. “There is no evidence to support his charge other than his self-serving statement in jail,” Rivera added.

“At some point you have to say to yourself,” he said, “if somebody had something, wouldn’t we see it?”