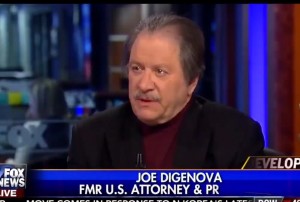 If former U.S. Attorney Joe DiGenova’s prediction is true, Hillary Clinton will most likely no longer be a contender for the 2016 presidential race. He told Fox News’ Gretchen Carlson that he thinks Hillary Clinton and some of her staff may be indicted within the next 60 to 90 days.

“They (the FBI) are going to make a recommendation that there is going to be charges against a series of people, ” DiGenova said on the program..

“What I know is that the FBI has been building a compelling — an unassailable case against Hillary and her surrounding group inside the State department,” he said.

Mr. DiGenova must have some inside knowledge about the investigation because so far the FBI director has refused to answer questions about the ongoing investigation into whether the private emails were mishandled.

Interestingly, this comes at the heels of the U.S. State Department’s Inspector General Office findings that the department gave “inaccurate and incomplete” answers to those who were trying to seek then Secretary of State Hillary Clinton’s records. For example, the report says the State Department mistakenly told a group they had no information regarding Hillary Clinton’s personal email account.