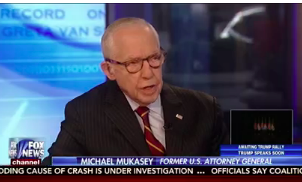 Former U.S. Attorney General Michael Mukasey said that given the evidence presented by the feds, there is no way Hillary Clinton would get a security clearance. This could be a problem if she, say, becomes President of the United States and needs to be briefed on intelligence matters.  Maybe the feds will make an exception?

“Anybody who has been found to do what the FBI found that she did would not get a security clearance,” Mukasey said during an appearance on Fox News. Mukasey was the nation’s 81st Attorney General, serving under President George W. Bush. He was also one of the earliest legal experts who claimed in January that a criminal charge would be justified.

“If you took his report and made it an FBI background check, she couldn’t get any kind of sensitive job in the government,” Giuliani said.

And if you take a look at the U.S. State Department’s own website, which describes how the feds determine if an individual will be granted security clearance, you can see where she might run into some trouble:

It must be determined that the individual’s personal and professional history indicates loyalty to the United States, strength of character, trustworthiness, honesty, reliability, discretion, and sound judgment, as well as freedom from conflicting allegiances and potential for coercion, and a willingness and ability to abide by regulations governing the use, handling, and protection of classified information.

Given that Comey said that Clinton’s use of private email was “extremely careless,” she may run into a problem with the whole “sound judgement” requirement.  And, given the fact that Clinton claimed she never sent classified email even though Comey said she had, she may also run into an issue with the “trustworthiness” category.  As for following the regulations surrounding classified information, a State Dept. Inspector General’s report found that she had some trouble with that as well.