Flashback: Guess What, Critics Also Worried Clinton Would Pardon Himself 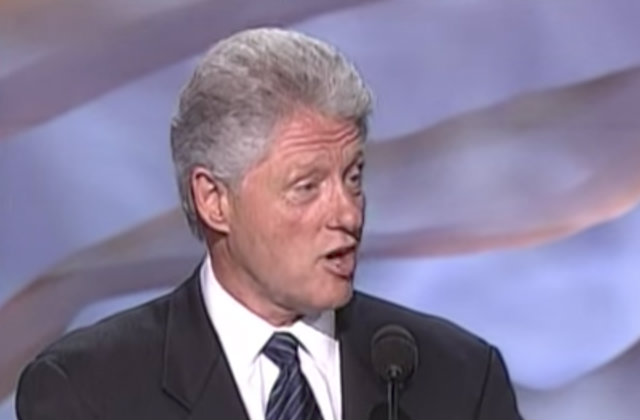 President Donald Trump might be annoyed because of worries he’d pardon himself over alleged wrongdoing, but people wondered if his predecessor Bill Clinton would do the same thing.

Executive branch pardoning powers popped up in the news cycle again because of a Washington Post report this week that said Trump asked advisers about the scope of this ability, and whether he could use it on himself. That detail caught attention since it appeared amidst a slew of investigations: A special counsel and several congressional committees are looking into whether POTUS’ campaign colluded in Russian-led cyberattack and election interference efforts in the 2016 election.

Clinton’s impeachment on Dec. 19, 1998 sparked the same concerns too, and the question hung in the air for years until he left office. Pundits back then struggled with the pardoning question because never before had a president used the power on himself. A Salon Explainer article explored the issue on Dec. 30, 1998. One possible result: The judiciary would give plenty of deference to the president:

Amazingly, the judge might rule that she isn’t permitted to interpret the meaning of the Constitution in this matter. This is because the Supreme Court has ruled that certain constitutional interpretations are the province of “political” branches, not the judicial branch. … By this reasoning, only the president can interpret the scope of the presidential pardon. In other words, in such a case, the judge might actually defer to a constitutional interpretation made by the criminal defendant (who happens to be the ex-president).

Meanwhile, officials denied the Commander-in-Chief would ever do such a thing. Vice President Al Gore, during an April 2000 appearance at the American Society of Newspaper Editors, said no, Clinton wouldn’t accept a pardon from the next POTUS. It’s worth mentioning that The New York Times fact-checked him:

”President Clinton is way ahead of you on this,” Mr. Gore said. ”He said publicly some time ago that he would neither request nor accept a pardon, so that’s the answer to that question.”

Despite Mr. Gore’s remark this morning, Mr. Clinton has never publicly addressed the question of a pardon. The White House said the issue was raised in the House Judiciary Committee’s impeachment hearings in December 1998. Representative Steve Chabot, Republican of Ohio, asked Charles F. C. Ruff, the White House counsel, if he could assure the committee that Mr. Clinton would not pardon himself or accept a pardon from a successor.

This didn’t stop people from making predictions. John Dean, White House Counsel under Richard Nixon, examined the pardoning question because “clues suggest” that Clinton would get indicted by Ray after the president left office. (This article came on Dec. 8, 2000, just four days before the Supreme Court settled the contested presidential election). Dean said the U.S. Constitution allowed the POTUS to pardon himself:

The text of the constitution, its history, and the placement of the pardon power within the structure of the constitution, all show that there are no limits on this power, other than the exception that prevents the president from pardoning “impeachments.” Accordingly, the Supreme Court has described this presidential power as “plenary.” As one recent commentator summed it up, short of a constitutional amendment, there is absolutely nothing “to prevent any president from pardoning himself.”