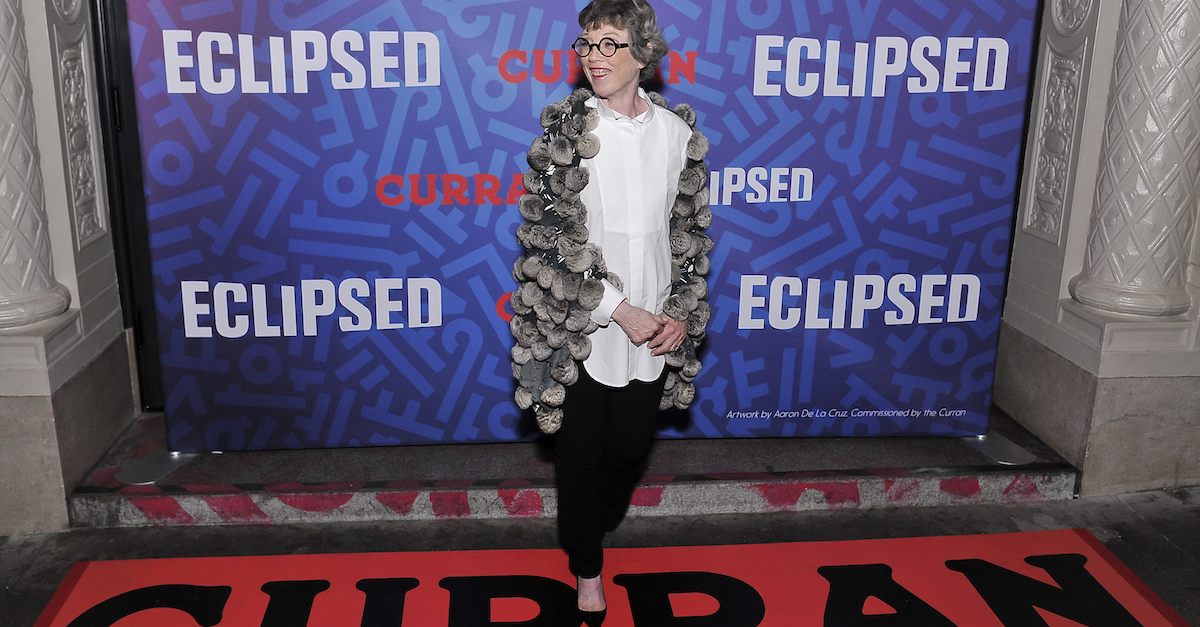 It’s hard to even know where to begin.

A 70-year-old San Francisco theatre owner once heralded as “The Bay Area’s most powerful theater producer” was called out in a major way by the Delaware Supreme Court for “ridiculous and problematic responses to questions” during a deposition. Carole Shorestein Hays, a past Tony Award winner, and her lawyer were both rebuked for their behavior during the lengthy deposition.

Sullivan & Cromwell partner Brian Frawley was criticized for doing nothing to “put an end to Hays’s flagrantly evasive, nonresponsive, and flippant answers” during a deposition that went on from roughly 9:30 a.m. to 7:00 p.m. Hays was locked in a dispute with theater partner Nederlander San Francisco (NSF). The parties jointly own Shorenstein Hays-Nederlander Theatres LLC (SHN), and the Golden Gate and Orpheum theaters in San Fran. In truth, the dispute is a pretty boring one that ended in a loss for Hays.

This is what this case was about, in summary (h/t Law.com):

The underlying fight pits Hays, who owns San Francisco’s Curran Theatre, against another San Francisco theatre owner, Robert Nederlander. He claims Hays improperly competed to put on the musical “Dear Evan Hansen” and the play “Harry Potter and the Cursed Child,” in violation of an LLC agreement governing another theater company in San Francisco, SHN, that the parties jointly own.

What wasn’t boring was what happened ahead of the ruling in this case. Hays sat for a deposition that won’t soon be forgotten. The court even saw fit to publish the exchanges between Nederlander’s attorney Michael S. Doluisio and Hays.

The court noted that the deposition excerpts were “a representative but incomplete identification of Hays’s ridiculous and problematic responses to questions”; the court also said Hays’s attorney “made no attempt to put an end to Hays’s flagrantly evasive, nonresponsive, and flippant answers.” 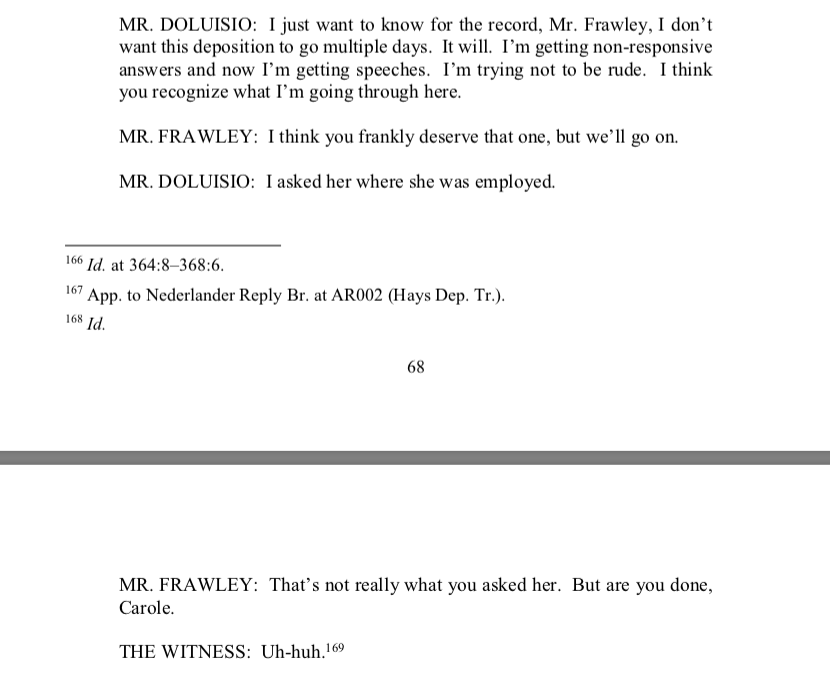 In a footnote, the court explained, in part, what Frawley did wrong:

Hays’s appellate counsel did not help matters during oral argument before this Court when he was questioned about his client’s deposition behavior. Aside from repeatedly interrupting the Court and talking over the Court when the Court was raising the matter near the end of counsel’s allotted time for oral argument, counsel for Hays failed to acknowledge the inappropriateness of Hays’s conduct and then even tried to make an excuse for her by simply— and incorrectly—telling the Court that this was Hays’s first deposition.

The court also said the trial court was right to make Hays pay for attorneys fees due to “willful bad faith litigation tactics” and for the “colossal waste of time” those tactics caused:

The deposition appears to have been a colossal waste of time and resources due to her behavior, which made a mockery of the entire deposition proceeding. Although this award of fees and costs is not challenged on appeal, we write to remind counsel that they have a responsibility to intercede and not sit idly by as their client engages in abusive deposition misconduct.

The Hays deposition was even called a “fiasco.”

“Such abusive tactics do a disservice to our busy trial courts, to all involved in the litigation process, and ultimately they impair the truth-seeking function of the discovery process,” the court said. “It is hard to imagine that any reliable factual information could be mined from the Hays deposition fiasco.”

The judges were very clearly flabbergasted by all of this, but the silver lining, in their view, is that this will be a lesson to new lawyers out there on what not to do when a client sends a deposition off the rails.

“Perhaps this episode can be used positively as a lesson to those training new lawyers on deposition skills. Lawyers have an obligation to ensure that their clients do not undermine the integrity of the deposition proceedings by engaging in bad faith litigation tactics; they cannot simply sit and passively observe as their client persists in such conduct,” the court said. “Given the restrictions on conferring with a client during deposition proceedings, these points obviously should be addressed beforehand in the deposition preparation.”

Here’s a sampling of what happened here.

What documents did you review? 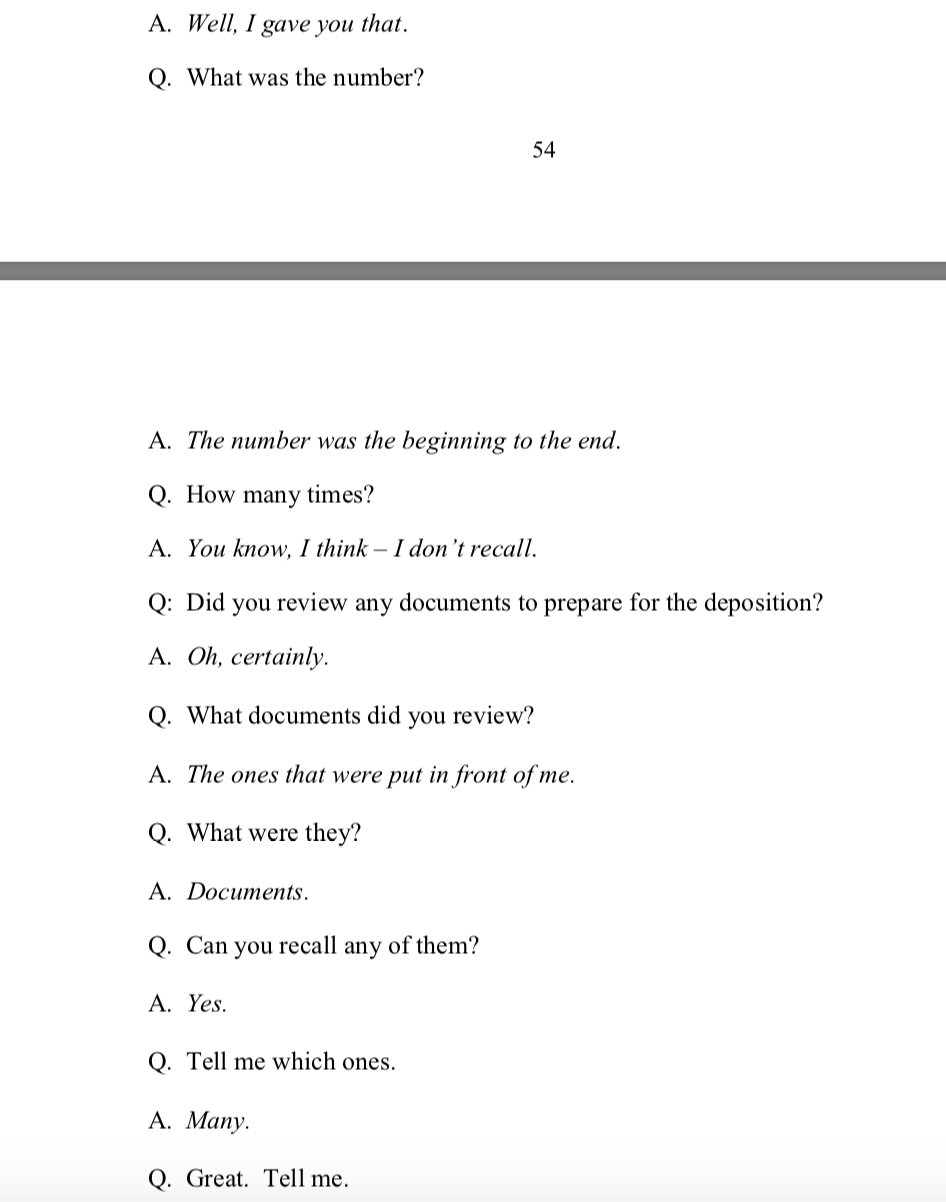 How much time did you spend preparing with your attorney for this? 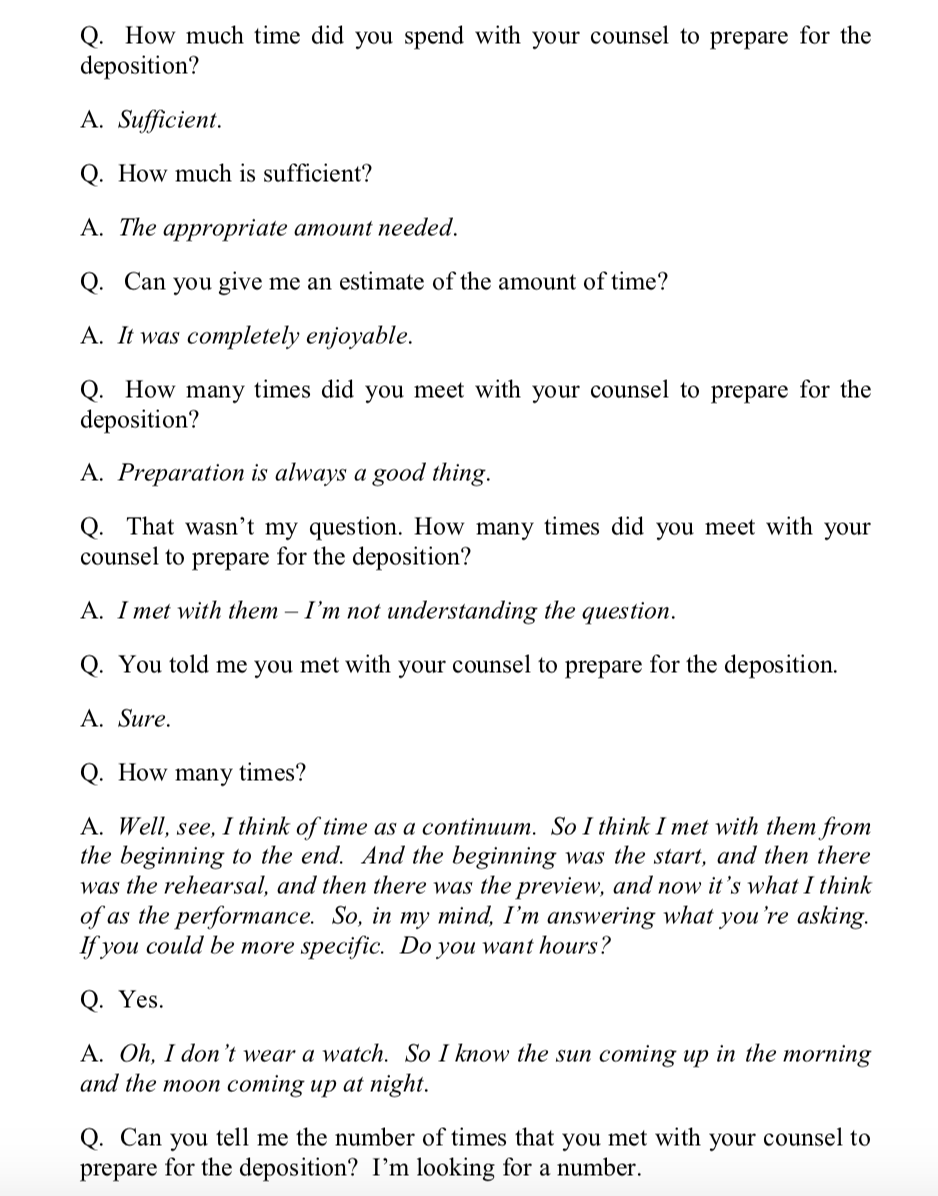 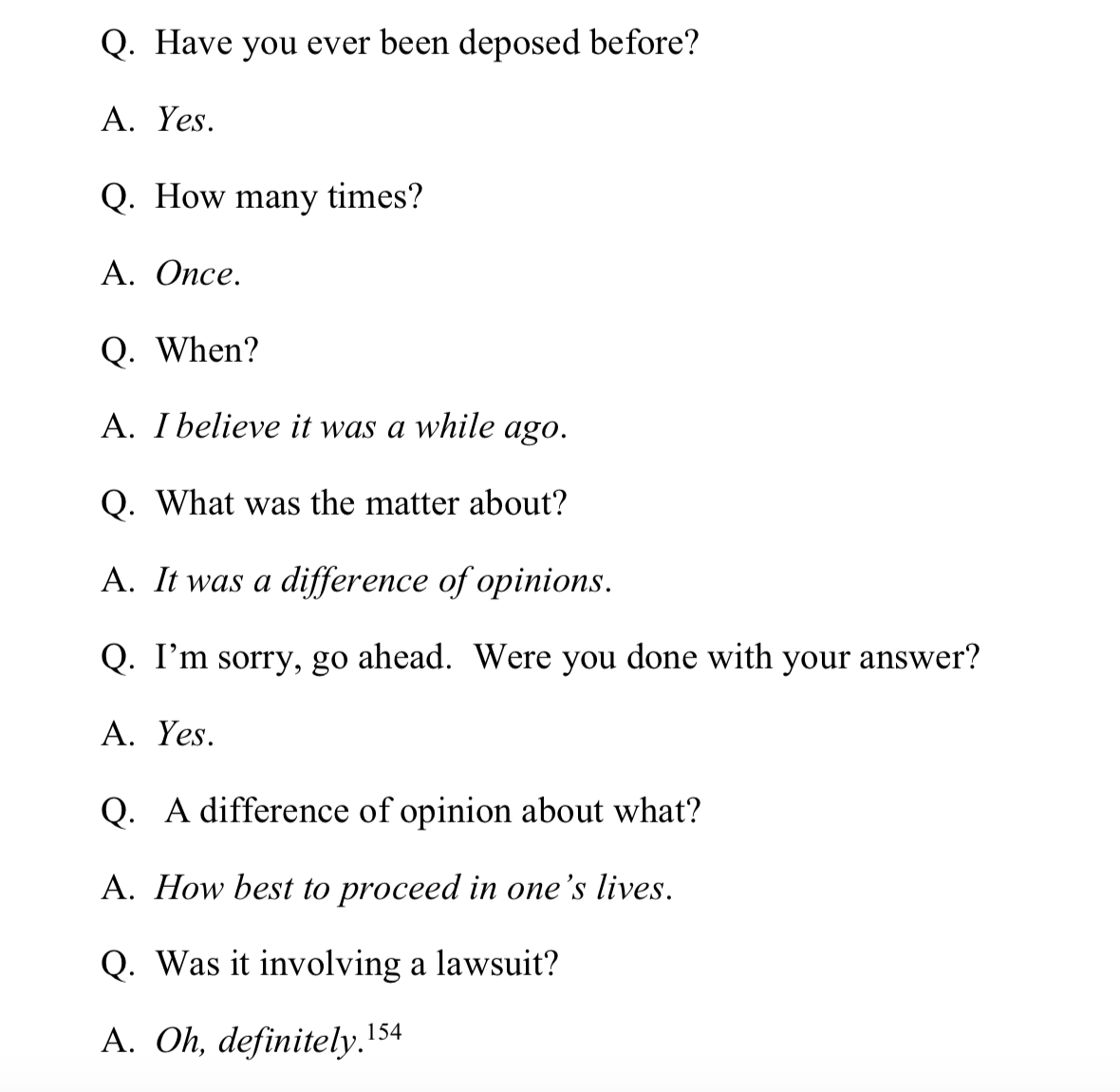 What are trumpets really for, anyway… 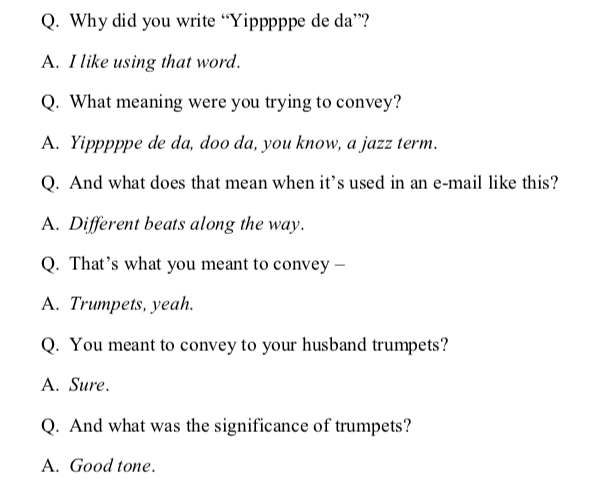 I’ve lived a long life, so I have no clue if I’ve been arrested 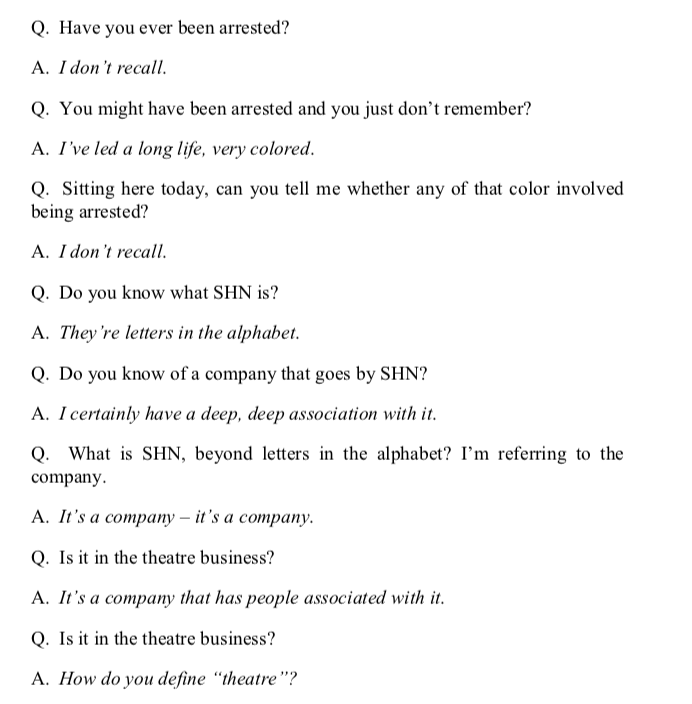 What’s employment mean? Not sure. 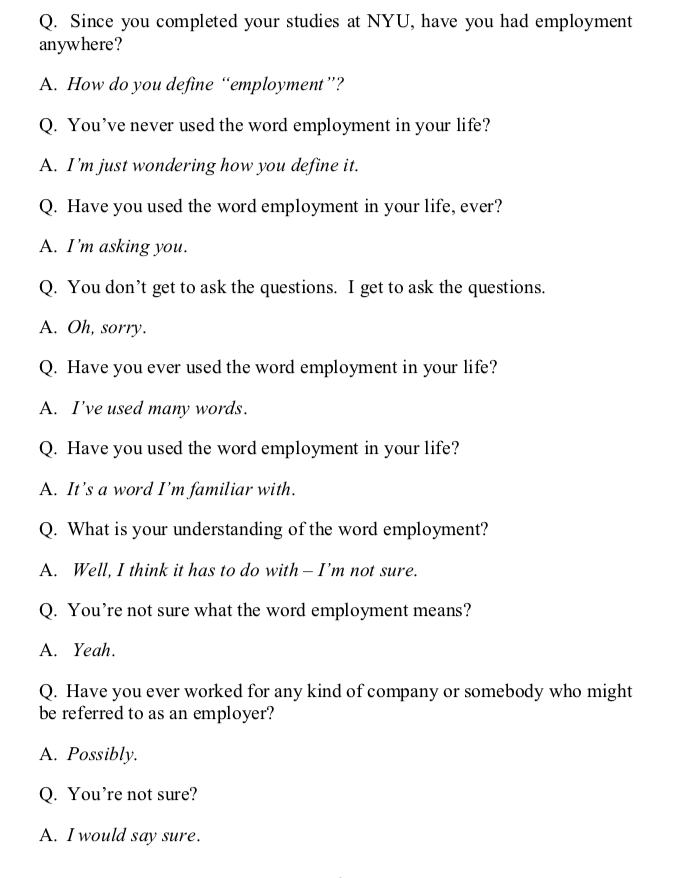 I definitely, definitely attended college in my youth. 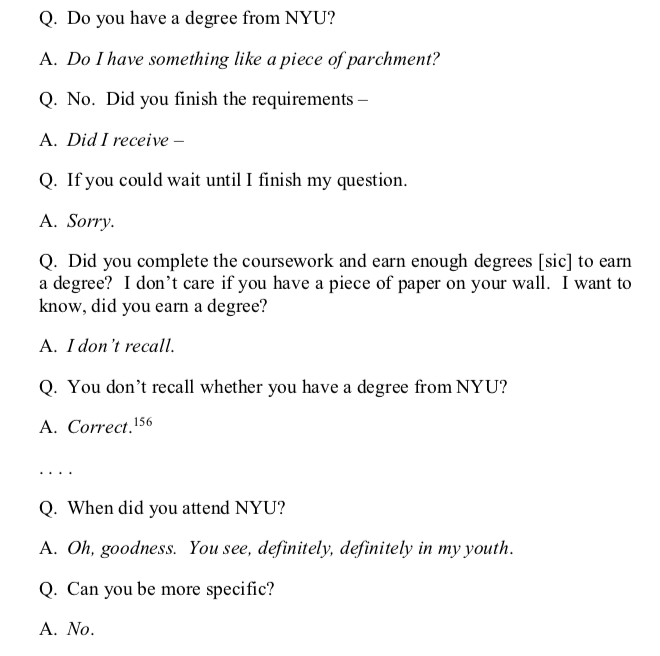 For what it’s worth, here Hays is in 1987 accepting a Tony Award.

And here she is in 2009 on the local news giving viewers at tour of the Orpheum theater in San Francisco.