Feds: Trump DC Hotel Not in Violation of Government Lease After All 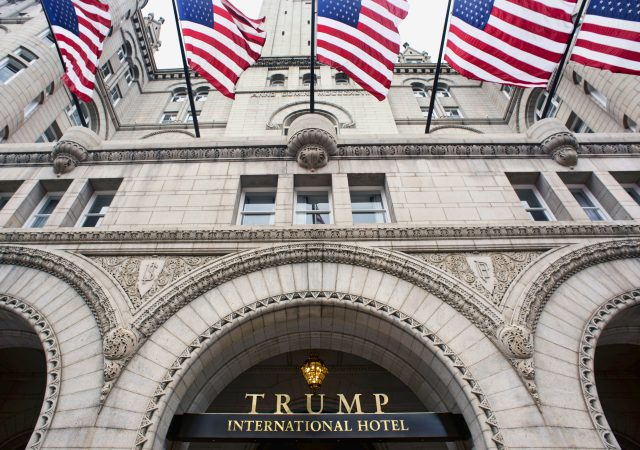 WASHINGTON (AP) — The federal agency overseeing Donald Trump’s lease for a luxury hotel in Washington ruled Thursday that his inauguration as president doesn’t violate terms of the agreement barring government officials from profiting from the property.

In a letter to the Trump Organization, General Services Administration Contracting Officer Kevin M. Terry says he has determined that the president’s business is in “full compliance” because profits from the hotel won’t go directly to Trump while he’s president.

The 2013 lease for the Trump International Hotel expressly forbids any federal official from participating or benefiting from the project, a $200 million renovation of historic Old Post Office building a few blocks from the White House.

Numerous ethics experts have questioned whether Trump violated the terms of his lease the moment he took the oath of office.

Steven Schooner, a professor of government procurement law at George Washington University, called Thursday’s ruling unpersuasive and damaging to the credibility of the GSA.

“It has never been easier for a foreign government, lobbyist or special-interest group to funnel money directly to the president of the United States and his family,” said Schooner, who served in the Clinton administration and contributed to President Barack Obama’s presidential campaign and other Democrats.

Trump announced in January he was transferring control of his business empire to his adult sons, but he still maintained a direct tie to the company through a trust. Trump is the sole beneficiary of the trust and can revoke it at any time.

Richard W. Painter, who was the lead White House ethics attorney for President George W. Bush, is among a group that days after Trump was inaugurated filed a lawsuit alleging he was violating the Constitution by allowing his businesses to accept payments from foreign governments.

The lawsuit claims the “emoluments clause” prohibits Trump from receiving money from diplomats for stays at his hotels or foreign governments for leases of office space in his buildings. The lawsuit is pending in the Southern District of New York.

“The economic benefit from this lease goes to him whether or not the hotel LLC holds onto it and no matter how many trusts they form to hold the hotel or to hold the money,” Painter said Thursday. “The focus should be on the economic reality of the transaction and it is very clear what that is. He gets the profits from this lease.”

According to the GSA’s letter, Trump restructured the governance of numerous corporate entities involved with the Washington hotel to remove himself as an officer. In a series of meetings, officials with the Trump Organization told the government that while Trump is president, no proceeds from the hotel business will be paid out to the holding company, DJT Holdings LLC. That company is owned by a trust benefiting Trump.

The profits from the hotel will accrue in an account under the corporate entity that holds the lease, Trump Old Post Office LLC. More than three-quarters of that company is owned by DJT Holdings. The money could then be used to make capital improvements to the hotel.

The letter does not address what might happen to any remaining profits from the hotel after Trump leaves office, or whether they could be transferred to Trump at that time.

The Trump Organization did not immediately respond to questions from The Associated Press about what happens after Trump is no longer president.

Democrats quickly criticized the GSA’s ruling, saying the agency had completely changed the position it held before Trump took office.

“This new interpretation renders this lease provision completely meaningless — any elected official can now defy the restriction by following this blueprint,” said a joint statement issued by Rep. Elijah E. Cummings, the top Democrat on the House Committee on Oversight and Government Reform, and Rep. Peter DeFazio, the ranking member on the House Committee on Transportation and Infrastructure.

“This decision allows profits to be reinvested back into the hotel so Donald Trump can reap the financial benefits when he leaves the White House,” the Democrats said. “This is exactly what the lease provision was supposed to prevent.”