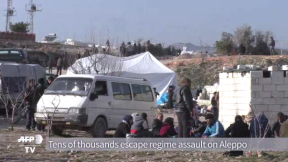 A federal judge in Texas has ruled that State efforts to halt the resettlement of Syrian refugees are without legal credibility.

Much ado has been made about the Syrian refugee crisis and President Obama‘s pledge to accept 10,000 Syrians. President Obama’s pledge, applauded by liberals and human rights activists, has faced stark Republican opposition from the likes of Presidential frontrunner Donald Trump.

Now, the comfortably red Lone Star State has been dealt a setback in their challenge.Judge David Godsby, a Dallas Federal District Judge, ruled that the State failed to show that government cooperation with local non-profits working to resettle Syrian refugees pose a credible threat to Texas. Godsby recommended that Republican leaders’ demurral be handled through “the political process.”

Rebecca Robertson, senior legal counsel of the American Civil Liberties Union of Texas (ACLU), represents the International Rescue Committee, an organization dedicated to global humanitarian aid and relief. The Committee was sued by the State of Texas after Republican leadership enjoined the government to cease cooperative assistance for the settlement of refugees.

As Robertson explained, “There is nothing in the law that gives the state veto power over any decision of the federal government or permits any state to discriminate against certain refugees based on their nationality, in fact the law says just the opposite.”

The lawsuit comes on the heels of nearly 30 states pledging to ban Syrian refugees following the November terror attacks in Paris. A new report gives some credence to the fears of Texans and the potentially insidious effects of accepting Syrian refugees.

Top U.S. intelligence officials are claiming that ISIS is determined to wage direct attacks in the U.S. in 2016. More poignantly, reports claim that the radical group is infiltrating refugee camps as fighters are moving with the wave of refugees fleeing Iraq and Syria.

James Clapper, Director of National Intelligence, believes ISIS is “taking advantage of the torrent of migrants to insert operatives into that flow.” Clapper added to what earlier reports have indicated: ISIS militants are skilled at mimicking legitimate travel documents and, consequently, pose an inherent risk to America’s national security.