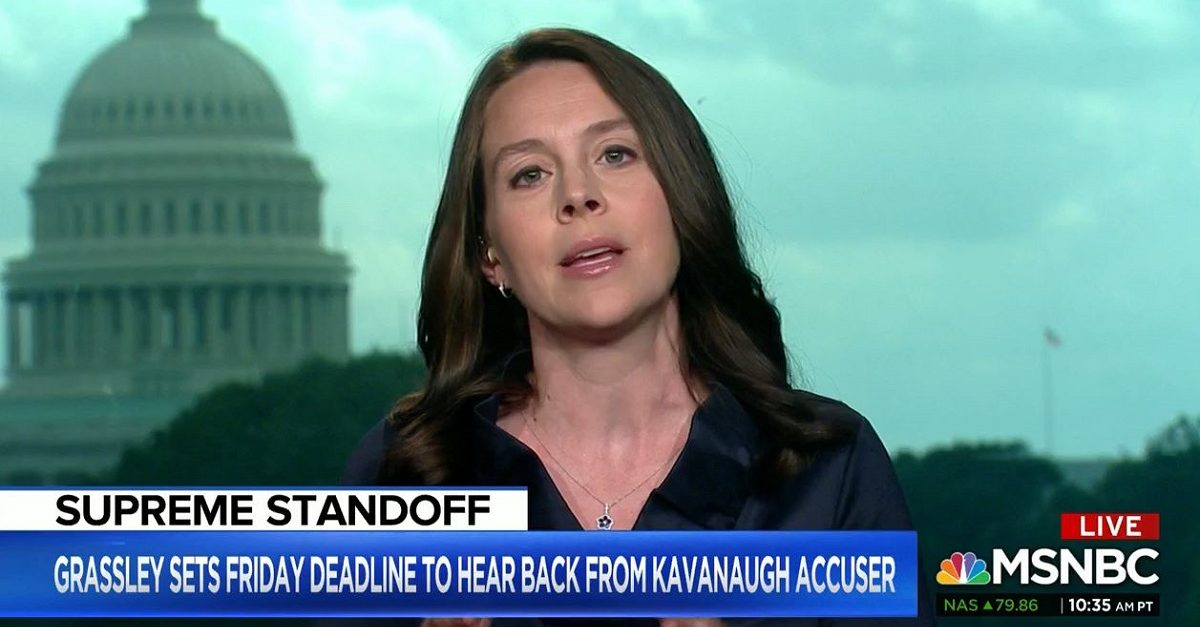 Carrie Severino is a former law clerk for Justice Clarence Thomas, so she’s no stranger to Supreme Court justices who have faced allegations of sexual misconduct. She’s also the chief counsel and policy director of the Judicial Crisis Network, a conservative organization that is behind a $1.5 million ad campaign in support of Brett Kavanaugh‘s confirmation to the Supreme Court.

Severino has been making the rounds on cable news in recent days, but her message has changed drastically in a short period of time.

Law&Crime reported on Tuesday about Severino’s appearance on CNN, in which she tried to downplay Christine Blasey Ford‘s allegations that Kavanaugh tried to rape her by holding her down, groping her and trying to take her clothes off. While acknowledging that Ford interpreted this as attempted rape, Severino claimed the details could also be taken to just be “boorishness” or “rough horseplay.” She then seemed to remember that Kavanaugh himself is denying that anything happened at all.

On Thursday, Severino went on MSNBC, and she had something very different to say: Ford should be taken seriously, and the allegations she made sound terrible, but she might have the wrong guy.

“I think it’s very possible she’s sincere with her allegations. Certainly the experience she described sounds awful,” Severino said. “But I think also the evidence points very clearly to the fact that it was not Brett Kavanaugh.”

When asked what evidence she’s referring to, Severino pointed to the lack of any kind of known pattern of similar behavior, plus women who knew Kavanaugh at the time and women who dated him saying the allegations do not match the Brett Kavanaugh they know.

Severino also noted the significance of having both Ford and Kavanaugh speak to the Senate so the truth can be determined. She said that Democrats’ call for an FBI investigation, however, is improper, because the FBI’s role in the confirmation process is to gather information, not make interpretations of it.

“That’s always handed over to the White House and the Senators,” she said.