‘Good Way to Go to Jail’: Calls Mount for Perjury Investigation into Sessions 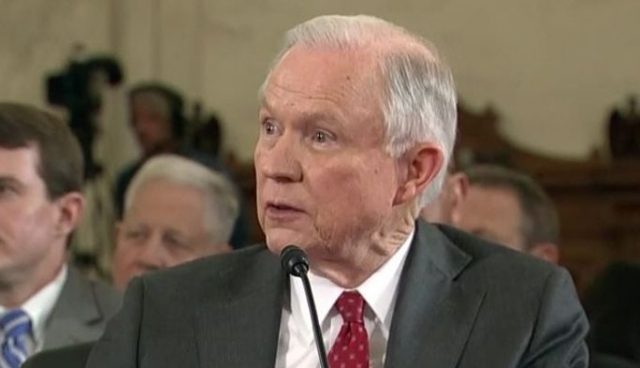 Attorney General Jeff Sessions said during his confirmation hearing that he was not aware of anyone associated with the Trump campaign communicating with Russia during the election season. He said, “I’m not aware of any of those activities,” and added “I have been called a surrogate at a time or two in that campaign and I did not have communications with the Russians.” Now, however, reports say that Sessions spoke to the Russian ambassador to the U.S. twice during the campaign.

Department of Justice officials told The Washington Post that Sessions had two contacts with Ambassador Sergey Kislyak in 2016, including a meeting in Sessions’ office in September and a previous conversation in July.

In a statement late on Wednesday, Sessions said that he “never met with any Russian officials to discuss issues of the campaign. I have no idea what this allegation is about. It is false.” Indeed, DOJ officials say that his contact with Kislyak was in his role as a member of the Senate Armed Services Committee, and not as a representative of the Trump campaign. Still, the Post reported that they reached out to all 26 Committee members, and all 20 who responded to them said they never met with Kislyak in 2016. “There haven’t been a ton of members who are looking to meet with Kislyak for their committee duties,” a Senate staffer told the newspaper.

The inconsistency between Sessions’ statements at his confirmation hearing and his contacts with Kislyak is enough that some are reportedly calling for a special counsel to take his place for the purposes of leading the DOJ’s investigation into Russian connections to the Trump campaign. “It is now clearer than ever that the attorney general cannot, in good faith, oversee an investigation at the Department of Justice and the FBI of the Trump-Russia connection, and he must recuse himself immediately,” Sen. Al Franken said.

It could also be enough for Sessions to be hit with perjury charges. If Sessions indeed lied under oath at his confirmation hearing, he could be convicted. Richard Painter, chief White House ethics attorney under President George W. Bush, seems to think so, tweeting about Sessions with a link to the Post‘s report.

Misleading the Senate in sworn testimony about one own contacts with the Russians is a good way to go to jail https://t.co/qH0s6sTMJ9

House Minority Leader Nancy Pelosi issued a statement about Sessions in light of the new reports. Pelosi said that “after lying under oath to Congress about his own communications with the Russians, the Attorney General must resign.” Pelosi also called for an independent, outside commission to investigate any connections between the President and Russia.

AG Sessions is not fit to serve as the top law enforcement officer of our country and must resign. https://t.co/5r8KpGQSRT pic.twitter.com/vKSVuvTIf3