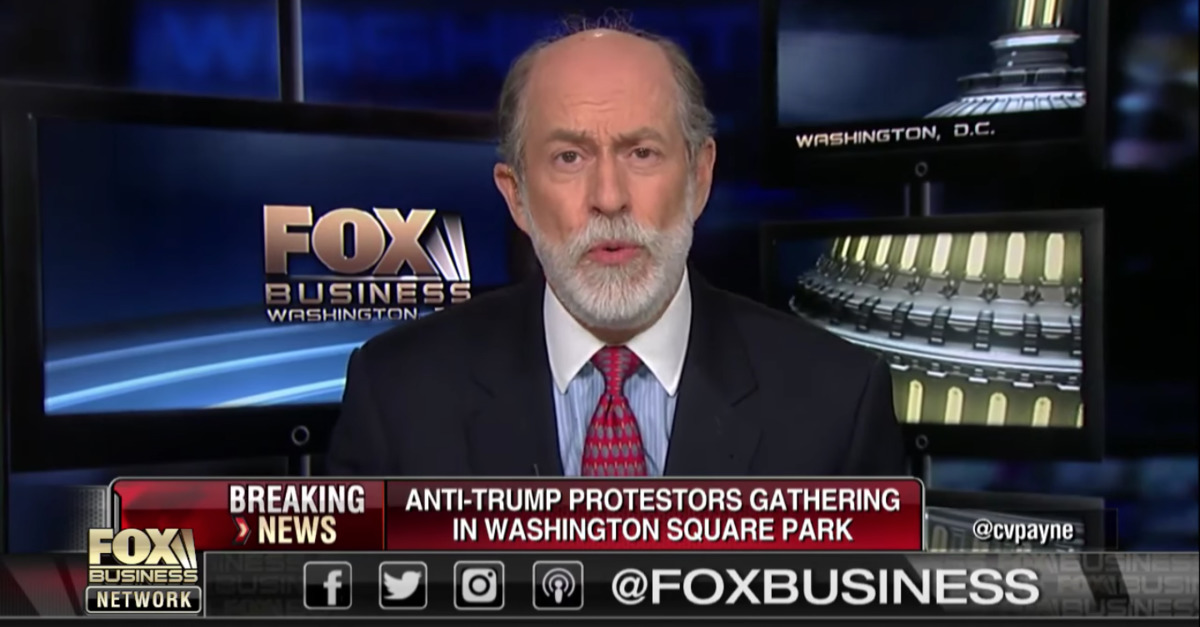 A prominent conservative author downplayed the seriousness of multiple bombing attempts which have targeted the media and liberal political figures in recent days.

Frank Gaffney is the founder and president of the Center for Security Policy, a far-right think tank influential in conservative and Republican Party circles. On Wednesday, Gaffney dismissed concerns over several bombs sent to prominent Democratic Party politicians and the offices of cable news channel CNN.

None of the leftists ostensibly targeted for pipe-bombs were actually at serious risk, since security details would be screening their mail. So let’s determine not only who is responsible for these bombs, but whether they were trying to deflect attention from the Left’s mobs.

Gaffney appears to be referencing the recent trend of left-leaning activists confronting conservative politicians like Ted Cruz and Mitch McConnell at restaurants and on the street over their support for hard-right immigration policies and figures like Supreme Court Justice Brett Kavanaugh.

The mob charge has been leveled against various left-oriented activists and the institutional Democratic Party since earlier this year after Representative Maxine Waters called for her supporters to peacefully confront members of the Trump administration over the controversial family separation policy at the U.S.-Mexico border.

Conservative media has run several segments dedicated to the “left wing mobs” charge in recent days over those protests. Critics have criticized this media coverage as lacking context.

Liberal outlet Think Progress notes that Fox News has dedicated something akin to wall-to-wall coverage to the “incivility” phenomenon despite the fact that the recent attempts at actual violence appear to have singularly targeted individuals perceived to be left-of-center like George Soros, Bill Clinton, Hillary Clinton and Barack Obama.

Veteran Democratic Party strategist Zac Petkanas took this criticism a bit further by noting, in his own viral tweet, “Let’s be clear about what is happening. Someone just tried to assassinate five of Donald Trump’s perceived political enemies.”

Gaffney’s professed nonchalance over the bombing attempts is of a piece with such recent trends in media. Response to his comments was furious and swift–quickly attaining the famed Twitter “ratio.”

One user provided some connective tissue between conservative talking points and Gaffney’s remarks:

Brought to you by the party of Law and Order.

Another heavily-favorited Tweet expanded on this line of thought:

So this is the story the fascists are going with? Since he couldn’t spell Brennan correctly, and thought he worked at CNN, we are looking for a dumbass who can’t spell. So let’s start the search at the White House.

AV Club writer Dennis Perkins summed up the mood of the replies to Gaffney’s post:

Law&Crime reached out to the Center for Security Policy for comment and clarification on this story but no response was forthcoming at the time of publication.