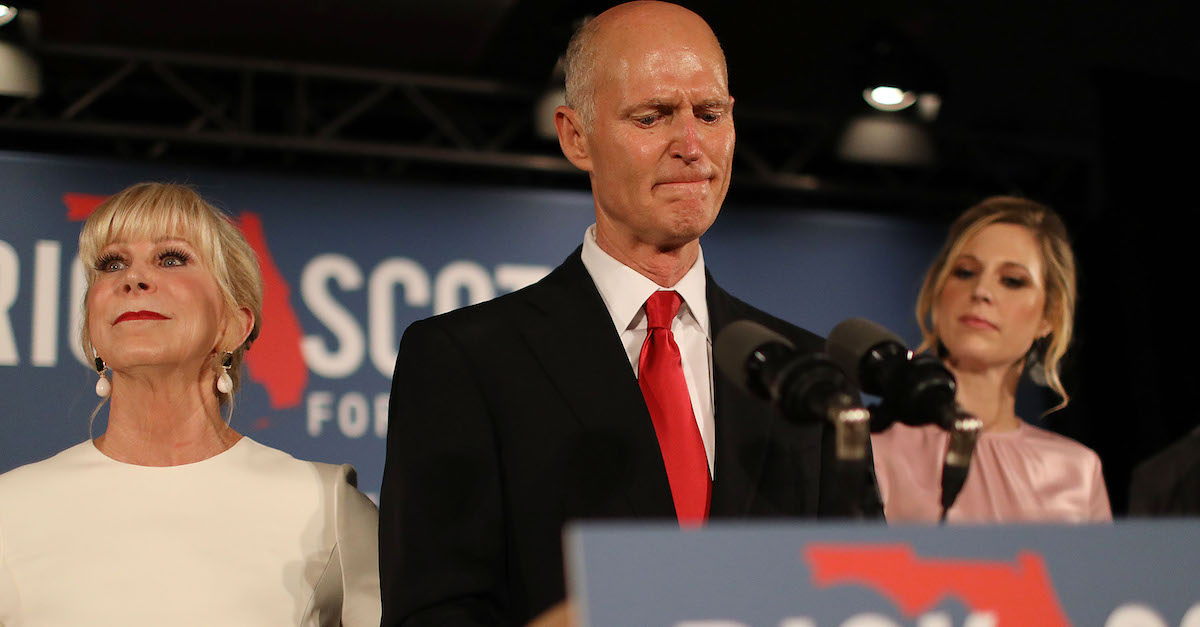 A Broward Circuit Court judge has denied Florida governor and Republican U.S. Senate candidate Rick Scott‘s injunction request, which asked for the judge to “impound and secure” voting machines and ballots at the Broward Election office as the winds of recount controversy swirl. The Senate race between Scott and Democratic incumbent Sen. Bill Nelson was too close to call.

Scott had argued that machines should be impounded when they are not being used for recounts.

Judge Jack Tuter notably shut down that request because he hasn’t seen evidence that would require him to grant it.

“I don’t think I have any evidence to enter a mandatory injunction right now,” Tuter said. Nonetheless, Tuter said, the public’s confidence in the vote counting process is of paramount importance. The judge even suggested sending three more armed Broward County Sheriff’s deputies to election headquarters as supervisors.

“There needs to be an additional layer of confidence,” Tuter said. According to CBS Miami, Tuter suggested that the county send two deputies to the election office to watch cameras and USB drives, and a third deputy to monitor the other deputies.

“They’re just saying, ‘We’d be more comfortable if we could somehow get an order from this court to at least imply that intervention was necessary because we didn’t trust Dr. Snipes.’ You want to talk about what undermines our electoral process, it’s that type of behavior, that type of suggestion, without any evidence. They’re talking about 2016,” Pettis said.

Tuter scolded both sides for inflammatory rhetoric about the recount.

“I am urging, due to high public nature of this case, to ramp down the rhetoric,” Tuter said, adding that the more transparency there is, the better.

President Donald Trump continues to say that “an honest vote count is no longer possible” because “ballots [are] massively infected.”

The Florida Election should be called in favor of Rick Scott and Ron DeSantis in that large numbers of new ballots showed up out of nowhere, and many ballots are missing or forged. An honest vote count is no longer possible-ballots massively infected. Must go with Election Night!

This was the latest claim made by the president that there is massive fraud afoot.

Trying to STEAL two big elections in Florida! We are watching closely!

“Trying to STEAL two big elections in Florida! We are watching closely!” he said over the weekend.