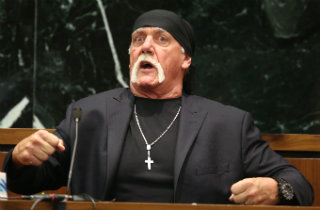 On Tuesday, yet another new wrinkle to the still ongoing drama stemming from Hulk Hogan’s lawsuit against Gawker Media, its founder Nick Denton, and former employee A.J. Daulerio, who was once editor-in-chief of the flagship Gawker blog. Daulerio was the only defendant who hasn’t filed for bankruptcy. Instead Hogan was able to get the court to agree to garnish his assets. After undergoing a lengthy deposition to get to the bottom of everything he owns, Daulerio is set to start fresh in California with a new job. Before Daulerio can do that, though, his lawyers wrote a sarcastic letter which was obtained by Death and Taxes.  The letter was written to Hogan’s counsel in an earnest effort to determine ask what he is allowed to take with him. And it’s pretty amazing.

We also wish to advise you that Mr. Daulerio intends to take the following personal items with him to California: his computer, his phone, and a limited amount of clothing. Would you like him to ship the other personal items he has in Florida – such as his rice cooker, dishes, books, and remaining clothing – to you? Or, would it be easier to ship those items directly to Mr. Bollea or Mr. Thiel? If it is acceptable to Mr. Bollea and his benefactor Mr. Thiel, Mr. Daulerio would prefer to take those items with him to California, but did not want to run afoul of their desires.

Daulerio’s rice cooker has become a sort of inanimate mascot online for those objecting to what Hogan, backed by billionaire Gawker-hater Peter Thiel, is doing here:

Whatever you think of Daulerio for his role in posting excerpts of the Hogan sex tape, the jury was instructed not to bankrupt the defendants, and Daulerio was already in debt thanks to unpaid student loans. His lawyers are clearly frustrated by what’s happening to him, as indicated not just by the above paragraph from the letter, but this one as well:

Finally, in reviewing the transcript from the deposition, Mr. Daulerio realized that he forgot to mention he has a golf club (a driver) with him in Florida. While it is likely too small for Mr. Bollea, it might be the right size for one of his friends. Please advise if you would like Mr. Daulerio to include the club in the items he plans to turn over, and, if so, to whom it should be sent.

It’s not yet clear what Hogan asked for in his reply or what Daulerio’s new job is.