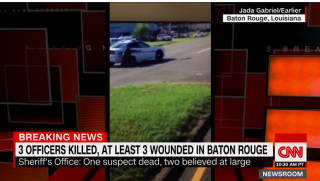 Police scanners picked up the harrowing radio calls from officers involved in a deadly incident on Sunday.  The latest reports state at least three officers are dead and several other officers were injured in a shootout near a convenience store in Baton Rouge, LA.

According to the police audio recordings, at  8:45 AM CDT an officer asked for additional officers to meet him at the B-Quick conveience store.  The officer stated that a woman approached him and “said there was a suspect walking with a (unintelligible) and an assault rifle out here behind the store.”

Moments later frantic calls of shots fired came over the radio, along with the dreaded report of an officer down.

Another officer the calls out that he had also been hit.

The audio also appears to show officers initially struggled to get eyes on the suspected shooter.