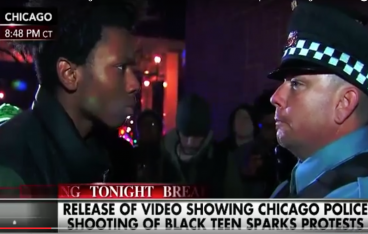 A new FiveThirtyEight analysis of crime statistics out of Chicago reveals the recent spike in gun violence in the Windy City is directly related to the release of a video that shows the police shooting of Laquan McDonald and the protests, activism and reforms that followed shortly thereafter.  The analysis provides strong evidence in support of the idea that Chicago is experiencing its own “Ferguson Effect” — a theory that says the recent increase in violent crime is the result of rank-and-file officers taking a less proactive approach to policing due to increased anti-police sentiment.

According to the FiveThirtyEight analysis, crime data shows 175 homicides and 675 nonfatal shootings incidents occurred in Chicago over the time period beginning December 1, 2015 and ending on March 31, 2016 (the McDonald shooting video was released on November 24, 2015).  This reflects a 48% percent increase in homicides and a 73% increase in nonfatal shootings from the same time period one-year ago.  FiveThirtyEight describes the statistical variations from year to year as too significant to be “explained by seasonal [weather] fluctuations or chance.”

If these numbers hold, Chicago will be on pace for approximately 570 homicides and more than 2,000 nonfatal shootings, which would make it the most violent year for the city in over a decade.  Even more troubling, FiveThirtyEight says the numbers that could get even worse if violence increases with warmer weather over the summer.

FiveThirtyEight also reviewed the data for arrests for homicides and nonfatal shootings in the four months since the release of the McDonald video and discovered equally troubling statistics.

In the report, FiveThirtyEight said they uncovered “little concrete evidence” that the drop in arrests is related to some sort of “organized police slowdown” in response to the protests and increased negative attention.

However, they did find a general concern amongst many officers about the current climate and attitude towards police.  As Chicago Police Department spokesman Anthony Guglielmi said, “No police officer wants to be the next viral video.”  Jamie Kalven, the journalist whose reporting is credited with drawing attention to the McDonald case, said that in speaking with Chicago officers he found “a genuine lack of clarity about the job description, the parameters of the job, and who will have their back in ambiguous situations.” As a result, officers are taking less proactive policing measures that are meant to prevent crime, such as street stops or really any “discretionary interactions with civilians.”

Here is what former lawyer, now sportswriter and sometimes social critic Clay Travis had to say about FiveThirtyEight’s findings on Twitter:

This is a great example of how social media activism — largely encouraged and championed by media — can have horrible results.

Before automatically dismissing Travis’ comments as mere hyperbole, take a look a deeper look at the stats in this story again.  While admittedly a bit over the top, Travis does make a valid point about the unintended consequences of the attacks on police officers in this country, consequences that up until now have often gone completely overlooked.  For months, the entire Chicago Police Department has been made out to be nothing more than a bunch of villains out to harm unarmed minority citizens.  We are now seeing the results, backed up by solid data in the FiveThirtyEight analysis, and it isn’t pretty.  Perhaps this can serve as good place to start looking at that other side of the coin, before it gets any worse.