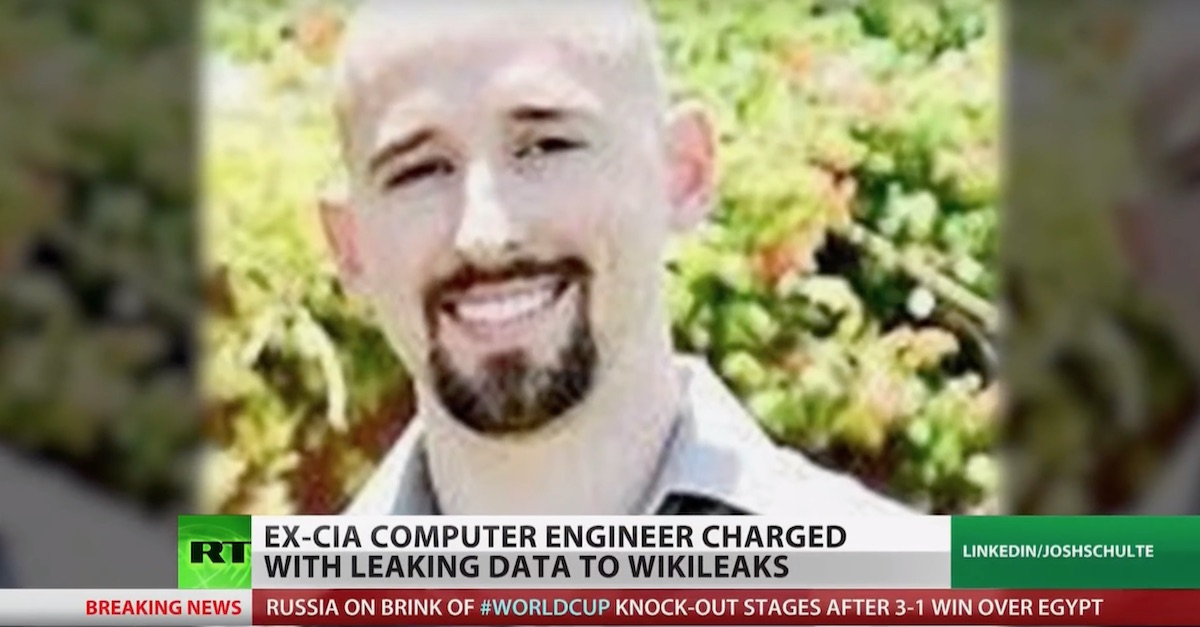 Accused Vault 7 leaker Joshua Schulte, 29 — the man allegedly behind the largest leak of classified information in CIA history — penned a letter to the judge presiding over his case in which he complained of “unconstitutional” treatment behind bars. Schulte, in particular, says he has not been able to consult with his attorney for the entire month of October.

After the letter was entered into court documents, it was inexplicably deleted, as Politico’s Josh Gerstein pointed out.

The link Gerstein shared, however, shows that the internet never forgets, and that the letter is still available for reading.

“Judge [Paul A.] Crotty, I am writing to you because I have been unable to contact my attorney, review my discovery, or even assist on my case in any capacity for the entire month of October,” the letter begins. “This is outrageous and clearly unconstitutional so I write to you for relief.”

“On Monday, October 1, I was called down for a legal visit. When I arrived, I was told that I was going to the ‘box’ for an indeterminate amount of time while they investigated me for something they refused to tell me,” Schulte continued. “And so, I was handcuffed in prison and led away in chains to the notoriously inhumane torture chamber that is MCC’s 9 South.”

Schulte claims he’s been denied the ability to speak to his attorney, and says “My fellow slaves constantly scream, pound, and claw at their cages attempting to get attention for basic needs to be fulfilled.” He claims to have witnessed beatings, “cruel and unusual punishment,” and says that “shit-stained showers” leave one in a dirtier state than when one entered.

“Otto Warmbier received better treatment and more justice in North Korea than I have received in America,” Schulte claimed. After being incarcerated for attempted theft of a political poster, Warmbier went into a coma while in the custody of Kim Jong-un‘s regime and was sent back to America in “a state of unresponsive wakefulness.” Warmbier died soon after at the age of 22.

The letter goes on and on. Schulte signed it as “Indefinitely Incarcerated Inmate Joshua Schulte.”

U.S. Attorney for the Southern District of New York Geoffrey Berman announced in June that Schulte had officially been charged for the unauthorized disclosure of classified materials.

Schulte was first named mid-May as the suspect in the 2017 WikiLeaks leak of “Vault 7,” which contained information about secret CIA cyber weapons, hacking tools and spying techniques.

He was charged for theft of classified national defense information from the CIA and for transmitting that to “Organization-1″ (WikiLeaks), and more:

[Schulte] is charged with one count each of (i) illegal gathering of national defense information, (ii) illegal transmission of lawfully possessed national defense information, (iii) illegal transmission of unlawfully possessed national defense information, (iv) unauthorized access to a computer to obtain classified information, (v) theft of Government property, (vi) unauthorized access of a computer to obtain information from a Department or Agency of the United States, (vii) causing transmission of a harmful computer program, information, code, or command, (viii) making material false statements to representatives of the FBI, (ix) obstruction of justice, (x) receipt of child pornography, (xi) possession of child pornography, (xii) transportation of child pornography, and (xiii) copyright infringement. A chart containing the charges and maximum penalties is below. The maximum potential sentences in this case are prescribed by Congress and are provided here for informational purposes only, as any sentencing of the defendant will be determined by the judge.

Schulte was first jailed in Manhattan on charges of possessing, receiving and transporting child pornography, the Washington Post reported. He pleaded not guilty.

“Joshua Schulte, a former employee of the CIA, allegedly used his access at the agency to transmit classified material to an outside organization.  During the course of this investigation, federal agents also discovered alleged child pornography in Schulte’s New York City residence,” Berman said in a statement. “We and our law enforcement partners are committed to protecting national security information and ensuring that those trusted to handle it honor their important responsibilities. Unlawful disclosure of classified intelligence can pose a grave threat to our national security, potentially endangering the safety of Americans.”

As Law&Crime reported before, Schulte’s apartment was raided in 2017 for his computer and notes, but authorities came up empty-handed as far as smoking gun evidence of leaking “Vault 7.”

Assistant U.S. attorney at the Southern District of New York (SDNY), Matthew Laroche, had said Schulte “remain[ed] a target” of an ongoing investigation into whether he used Tor to anonymously disclose classified information.

A source with knowledge of what Schulte did at the CIA told the Washington Post he coded for the Engineering Development Group (EDG), a group involved in the development of cyber weapons. Schulte commented that he wanted to serve his country after 9/11 and did so during his time at the CIA.