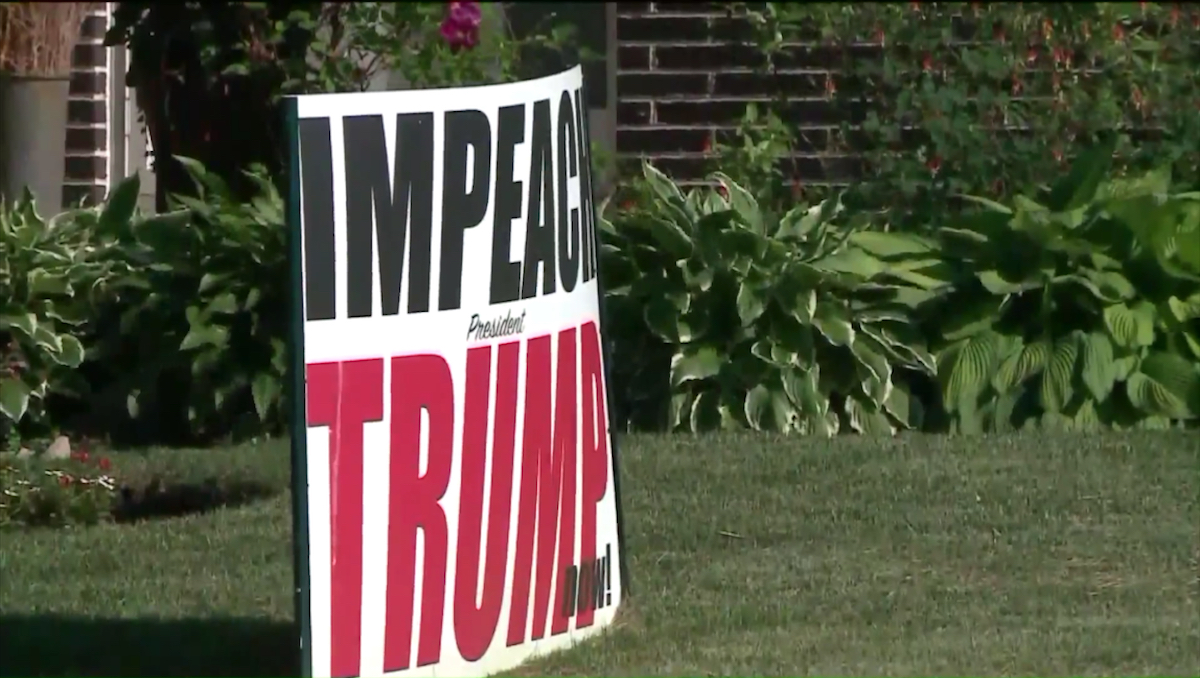 Myra Becker has been told to remove an anti-Trump sign from her yard by the City of Elgin, Illinois. That sign reads: “IMPEACH President TRUMP now!”

But Becker says she won’t be taking her sign down. Instead, she plans to fight.

In comments to Chicago’s WGN, the 94-year-old lifelong Democrat said, “It really was that I can’t march anymore. I can’t protest anymore and I’m not great on the walker for doing things. I could put a sign up.”

Sometime in May, an anonymous complaint about the sign made its way to Elgin city officials. A few days ago, an Elgin city inspector paid a visit to Becker and told her that the sign on her property was too big and must come down.

Elgin spokesperson Molly Center said the sign is twice the size allowed by the city code. Center said, “She can replace the sign with the exact same content as long as it is in the three square feet.”

Under First Amendment jurisprudence, the government (federal, state, county, city or otherwise) may institute certain “time, place and manner” restrictions on protected speech so long as such restrictions are: (1) not based on content; (2) are narrowly tailored to serve a compelling governmental interest; and (3) allow ample alternative means of expression.

Elgin’s likely argument here is that their size prohibitions are valid “time, place and manner” restrictions. This is actually a fairly high burden for governments to meet, therefore sign-related First Amendment issues are a dynamic and heavily-contested area of law and such ordinances are frequently struck down. With that explanation in mind, Law&Crime remains agnostic on the merit of such arguments in this instance.

Becker said the size of the sign wasn’t on her mind. She actually purchased two: one for herself and one for a friend. She said, “I didn’t think anything about it. It never occurred to me I should have thought of that.”

Rather, Becker said, she was focused on the message. She’s voted for Republicans before, but feels that President Donald Trump is engaged in an attack on America’s democratic institutions. She noted, “This is too precious. Our democracy is much too precious to let this happen.”

And, Becker says, she doesn’t have much confidence in the president’s own party to reign him in. She said, “I think the Republican congresspeople are wimps. I guess, whatever word may be better, you use your judgment.”

As Becker considers her options, however, she says the sign will be staying put. She’s already contacted the sign company to see if they can produce a smaller version and will likely replace the larger sign once she receives the new one. In the interim, Becker could be fined $50 over the too-large sign.