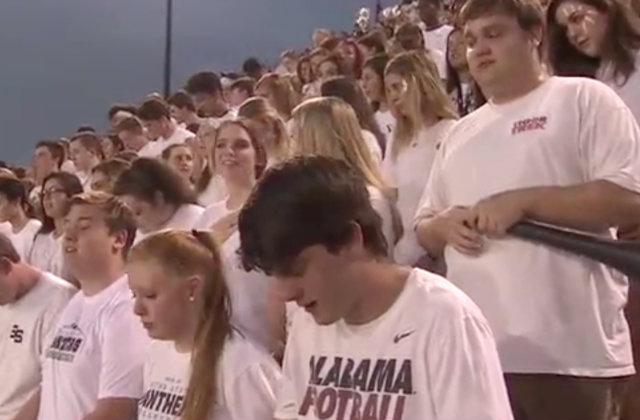 An Alabama school district is no longer allowing prayer on high school loudspeakers after an atheist group said it was unconstitutional, even when students initiated the invocation.

“It is illegal for a public school to sponsor religious messages at school athletic events,” wrote the Freedom from Religion Foundation in a letter dated August 31 to Lee County Schools Superintendent James McCoy. They said a parent complained to them that local Smiths Station High School broadcasted a led prayer over the loudspeaker ahead of the first football game of the season on Saturday, August 25, 2017.

The FFRF said that’s not allowed, citing several court decisions including the U.S. Supreme Court’s 2000 ruling in Santa Fe Independent School District v. Doe. That case covered a policy similar to the one at issue here. Long story short, a New Mexico school district had a policy authorizing a student election to decide whether invocations would happen, and another election to choose a spokesperson. Justices ruled 6-3 that this violates the First Amendment’s Establishment Clause even though the prayer was student-initiated.

McCoy followed suit after reading the FFRF letter, ending the use of school property for religious purposes in September, according to a WRBL.

The FFRF said Sept. 21 that they were glad to hear the decision.

William Sanderson, an attorney for Lee County Schools, told Fox 5 in a Friday report that he advised the district to end prayer initiated by student employees, and to stop the “use of state resources in a religious context.”

For now, at least some religious students in the area seem accepting, though disappointed at the decision.

“It shook me so bad,” student Katie Johnson told the outlet. “I never imagined that God could be taken out of our community.” But she also said that “it’s the right decision. As much as we don’t like it, we have to think about aspects of every religion.”

Many students are still praying at games, nonetheless. Students from both Smiths Station and Central High Schools joined together last week to say the Lord’s Prayer during the scheduled moment of silence ahead of their football game.