Associate Professor at the South Texas College of Law in Houston Josh Blackman‘s visit to City University of New York (CUNY) to speak on the topics of originalism and “The Importance of Free Speech on Campus” was met with protests by law students yelling things like “fuck the law.”

One woman could even be seen holding up a sign in one hand saying “Your legal analysis is lazy and wrong” and another saying “Fuck off” in her other hand. 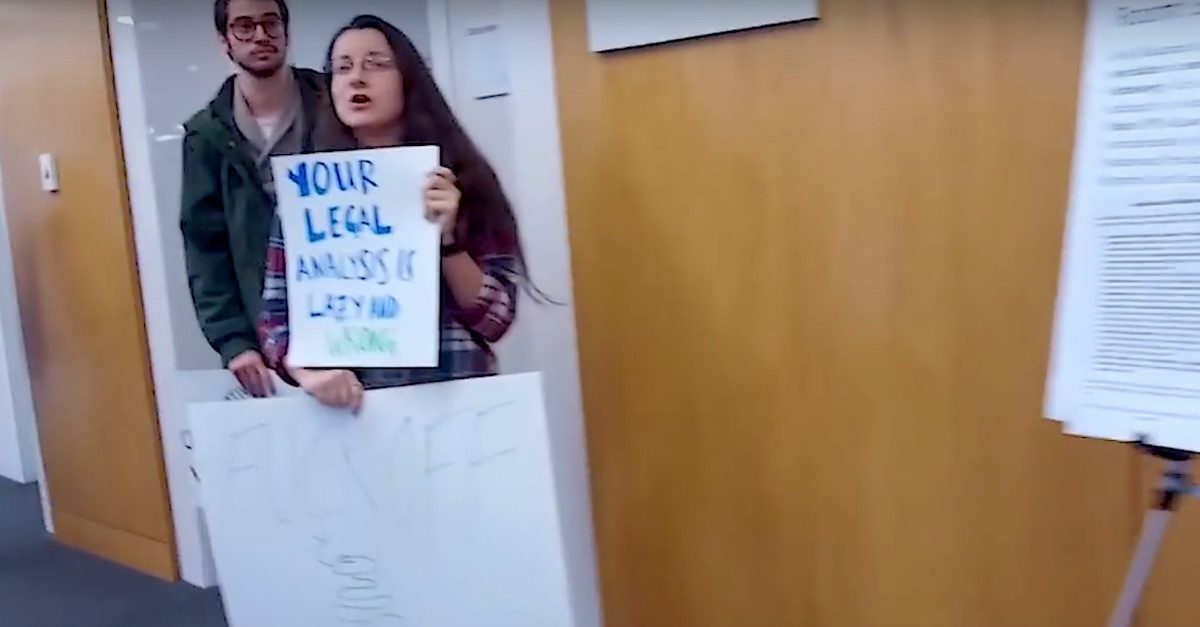 Blackman put up a lengthy blog post on Thursday, he said, in an attempt to “recount the events that led up to the protest” on March 29, and to provide some details about the things he encountered during the protest.

He also included a video that you can watch above. The protests happen mostly in the first eight minutes.

But before we go deeper, some context.

Blackman was invited to the school by the Federalist Society for Law and Public Policy Studies (FedSoc) chapter at CUNY to speak on originalism. FedSoc is a nonprofit with a conservative and libertarian bent, which “place[s] a premium on individual liberty, traditional values, and the rule of law.”

He said that three days before the speech, the president of the FedSoc chapter said “enraged students” were planning a protest because “they saw a few of your writings (specifically a National Review article praising Sessions for rescinding DACA and ACA)” and assumed he was a racist.

That student did say that, despite the anger, the school still supported the event.

Blackman showed up anyway, but as soon as arrived he was greeted by “several dozen students,” he said, booing, hissing and chanting “shame on you.”

Some of the other phrases included “Legal objectivity is a myth” and “He’s a white supremacist.”

Eventually a school administrator walked in and told the students they can protest, but can’t keep Blackman from speaking. When a student responded “Why are you not providing support for students affected by this hate speech,” the administration said “Did you hear me?”

The student then complained that they were be spoken to like children.

“We are not children. You can’t talk to us like that,” the student said.

Eventually Blackman elicited gasps from students when he said “I actually support the DREAM Act.”

“Were I a member of Congress, I would vote for the DREAM Act. My position is that the policy itself was not consistent with the rule of law,” he said.

Not long after someone shouted the “fuck the law.”

“A student shouted out ‘Fuck the law.’ This comment stunned me. I replied, ‘Fuck the law? That’s a very odd thing. You are all in law school,'” Blackman wrote.

Law&Crime reached out to Blackman for comment about the “fuck the law” moment. He said that this was the only response he got when he tried to dialogue on a legal question and expressed worry about the future of the legal profession.

“When I tried to engage the protestors on a legal question, their only response was ‘Fuck the Law.’ This incident was bizarre,” he said. “If law students can’t engage in reasoned argumentation, then I worry for the future of our profession.”

When asked for his thoughts on the “Your legal analysis is lazy and wrong” sign, he said, “I actually like the ‘lazy’ sign. I thought it was hilarious!”

Blackman went on to write that he later learned protesting students moved from the classroom to the Dean’s Office to complain.

He said he didn’t end up using his prepared remarks and answered questions instead, though he was called a “cuck” by an apparent Donald Trump supporter before his day was done.