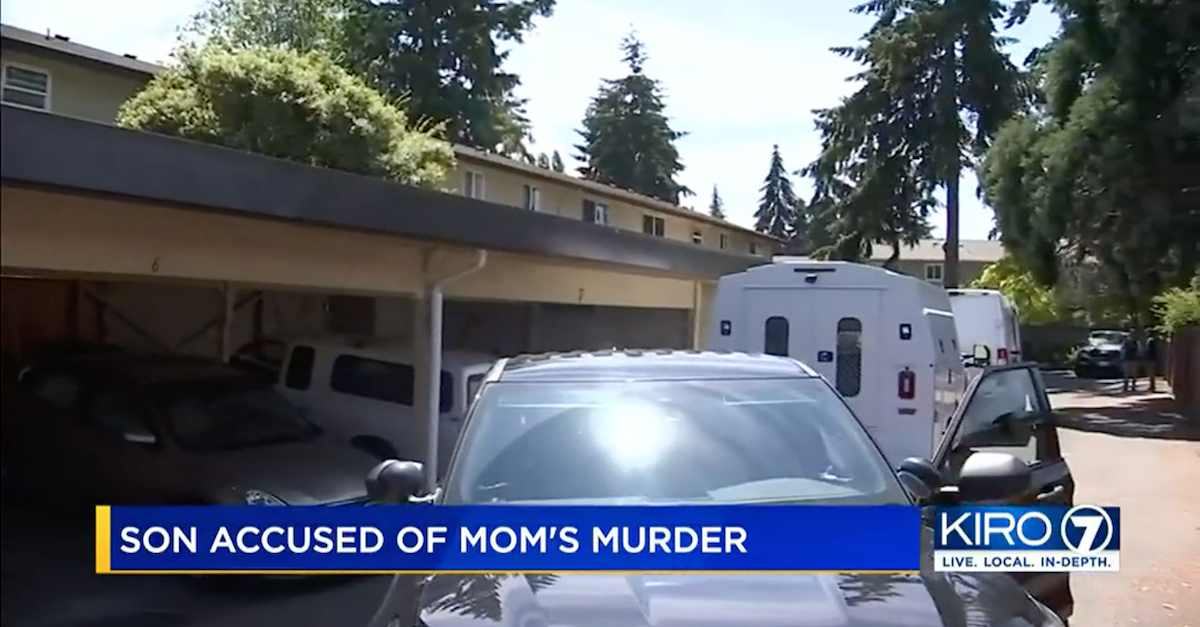 Laurie Collins was reportedly decapitated in this complex.

A Washington State man from the Seattle metropolitan area is behind bars after his mother was found decapitated.

Collin Boldizsar, 29, stands accused of murder in the second degree over the gruesome death and dismemberment of his 70-year-old mother, Laurie Collins, according to court documents and courtroom statements cited by Seattle CBS affiliate KIRO.

“This was an extraordinary, violent offense, demonstrating that the defendant is a significant threat to community safety,” King County Senior Deputy Prosecutor Terry Carlstrom told a judge during a probable cause hearing on Thursday, June 30, 2022.

According to Seattle NBC affiliate KING, Boldizsar answered the door at his mother’s home in Shoreline, Washington when King County deputies arrived during the early morning hours of June 29, 2022. He then promptly “closed the door,” a statement of probable cause reportedly says. The defendant allegedly opened the door again a few minutes later, stepped outside, then closed it behind him and locked it.

Law enforcement says Boldizsar then allegedly admitted to violating a protective order that his mother took out against him in May of this year – but that he quickly changed his story after that when asked to account for her whereabouts. First, he allegedly said she was at work. Deputies then asked why his mother’s car was still in her parking spot – part of the report that brought them out in the first place.

That inquiry led to a shift and turned the conversation to the screams.

A concerned neighbor reported that Collins’ vehicle had been in her assigned parking space much longer than usual – including times when she was normally at work. Then, at around 2:00 a.m., the neighbor heard screaming coming from inside her residence. Those screams were followed by “a series of loud ‘thumping’ sounds,” the probable cause statement obtained by the TV station notes.

Asked to account for those noises, the defendant allegedly said he and his mother had simply been arguing and that they argued “all the time,” according to the probable cause statement.

Deputies eventually forced entry into Collins’ house and reportedly found her body in a bedroom upstairs with a baseball bat nearby. The affidavit is said to have described the gruesome find as “the decapitated body of what appeared to be an adult female.” Arresting officers wrote that Boldizsar had “self-inflicted superficial wounds to both wrists as well as cuts to both hands.”

During the Thursday court hearing, Carlstrom said the defendant “was living at the residence of the victim in violation of a court order,” according to KIRO. Boldizsar was ordered not “to not contact Collins directly, indirectly, in person or through phone calls or electronic means and to not come within 1000 feet of Collins’ residence.”

The judge ordered him to be detained based on the probable cause presented by the prosecution and assessed $2 million bail.

Several online video game publications have identified the defendant as a professional Super Smash Bros. player who went by the name “Sweets.” According to a LinkedIn account that appears to belong to Boldizsar, he attended the university where his mother worked.

Neighbors interviewed by both local TV stations said the mother and son had ongoing issues and troubles, including “mental” ones.

Collins was a budget manager at Seattle Pacific University where she worked for the School of Theology.

The university is deeply saddened by the death of our longtime and treasured colleague Laurie Collins, budget manager in the School of Theology. Many faculty, staff, and students have known and worked with Laurie during her more than 30 years at SPU. She was a loyal and dedicated assistant for many departments, and a faithful colleague whose devotion to Christ was evident through her work. She will be profoundly missed by the SPU community.

Boldizsar will reportedly be formally charged on July 5, 2022 due to the 4th of July holiday.