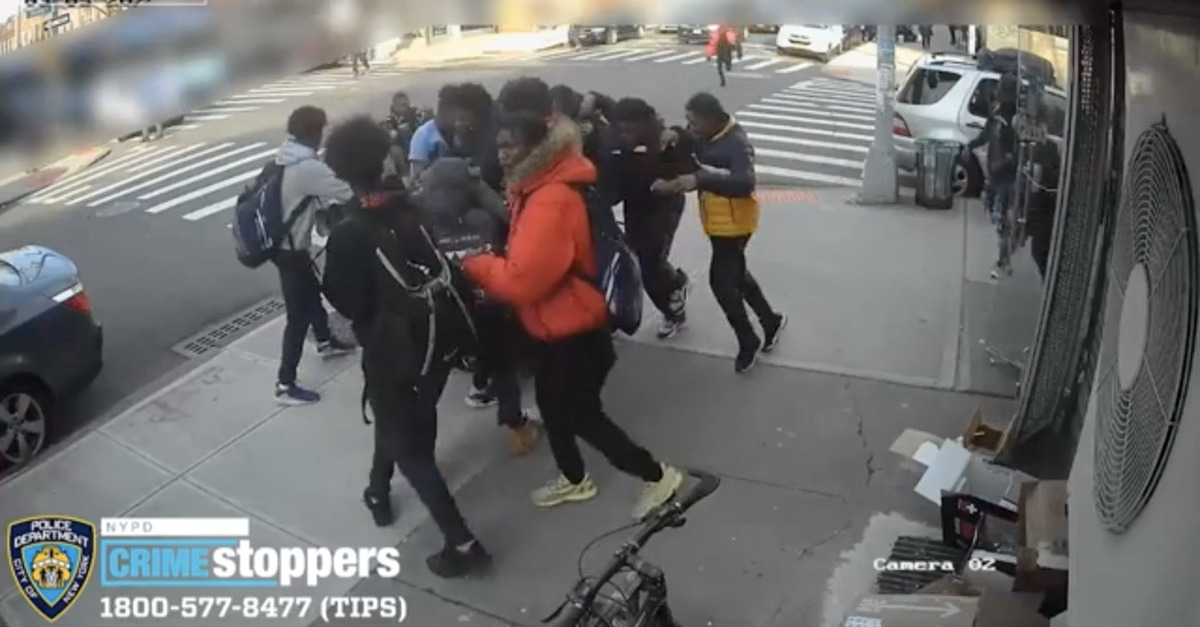 A 15-year-old girl in Brooklyn was brutally assaulted by over a dozen boys in a shocking attack that was caught on surveillance footage released Friday by the New York City Police Department (NYPD).

The young woman had her cell phone, a debit card, and her shoes taken while she was walking down the sidewalk in Crown Heights.

She is reportedly traumatized and has trouble maintaining focus.

Brooklyn Borough President Eric Adams compared the girl’s assault to a recent bout of police brutality in the Canarsie neighborhood—wherein a swarm of NYPD officers viciously and repeatedly attacked a black man after he allegedly smoked marijuana in a city park—and called for justice over each incident.

“This person on the ground is a 15-year-old girl. Someone’s daughter. Someone’s sister. Someone’s niece,” Adams said while narrating the attack in which appeared one of the assailants was in the air and preparing to stomp on the girl. “This is outrageous.”

“You see a group of people stomping this girl and look who’s around. These are young men. This is unacceptable,” he said in a Facebook Live post during which he showcased videos of each tragic attack. “And it’s not funny. It’s not cute. It’s not something we can ignore and act like it did not happen.”

Community activist Tony Herbert is kin to the girl who was attacked.

The activist speculated as to what prompted the collective beating:

This was just a bunch of kids who converged on Utica Avenue They hang out at the McDonald’s. So when kids saw it, they all got involved. Some of them probably don’t even know what they got themselves into by doing what they did. Now they’re all facing felonies.

“I don’t want to see young people go to jail,” Herbert added. “But they can’t commit these kind of crimes.”

The NYPD, however, offered a different explanation—saying that the attack was in some way retaliatory but declining to elaborate further.

“We will never tolerate this violence in our city,” NYPD Chief of Department Terence Monahan said Friday evening via Twitter. “[NYPD detectives] need the help of every New Yorker so they can arrest those responsible.”

At least five of the alleged assailants turned themselves in—led to the station house by their parents.

The mother of one of the children implicated in the attack blasted her son during an interview with the New York Post.

“I watched the video twice, it kept popping up on my feed,” said Donna Howell, who was in an a salon at the time. “I realized, that’s my kid. I just went numb . . . I was beyond shocked.”

“When I saw the video, I wanted to kill him with my bare hands. Why would you stomp on somebody you don’t know? You don’t jump on a woman,” Howell continued.

“If I was that girl’s father, I would want to kill all of them. This is unacceptable on all levels. You don’t ever put your feet on someone, and you definitely do not treat a female like that.”