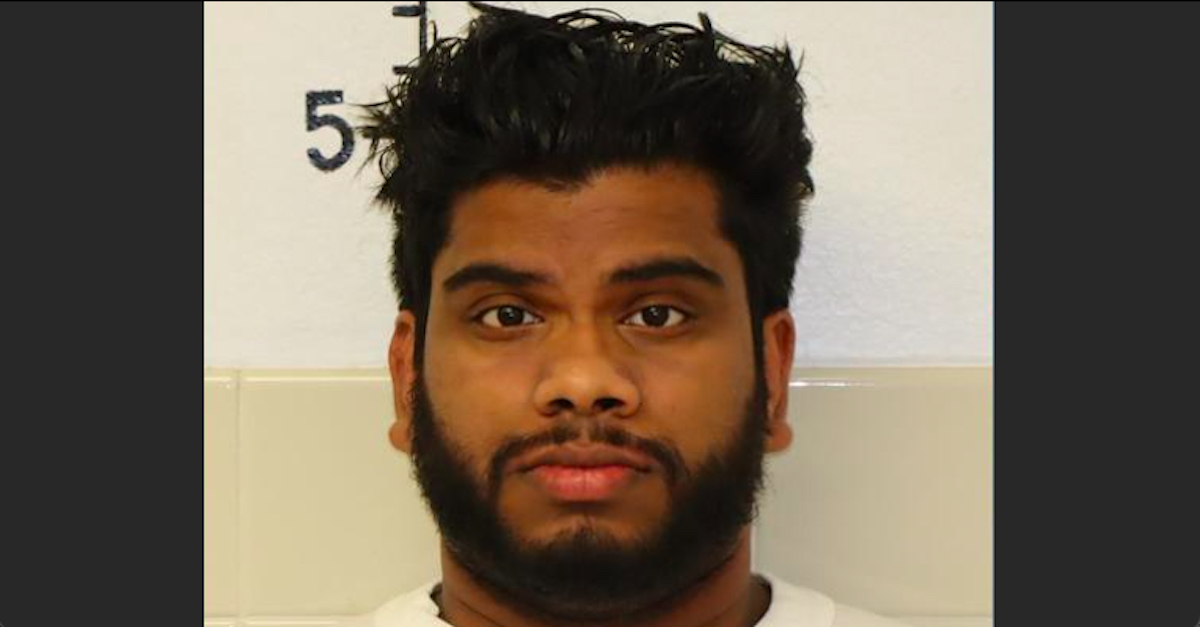 An Easton, Pennsylvania man was arrested last week after he allegedly murdered an elderly woman in her New Jersey home and beat her wheelchair-bound son to within an inch of his life before duct-taping a plastic garbage bag over his head. Kyle P. Kaspereen, 24, was taken into custody and charged on Thursday with a slew of felonies stemming from last month’s attack, including homicide and attempted homicide charges, WFMZ-TV reported.

According to the report, officers with the Washington Township Police Department at approximately 8:15 p.m. responded to calls requesting a welfare check at the residence where 84-year-old Elaine Trachin lived with her 52-year-old son, William Trachin. Several neighbors reportedly requested the welfare check at the residence located on Wayne Street after “hearing commotion” coming from inside, Patch reported.

Upon arriving at the scene, first responders reportedly found Elaine dead from what appeared to be blunt force trauma to the head, said court documents obtained by The Express-Times. Soon after, officers found William in a bedroom of the home. His hands had reportedly been duct-taped to the arms of his wheelchair and a garbage bag had been placed over his head and upper-torso. The bag was also duct-taped. The victim reportedly suffered “severe” blunt force trauma to his  head and was airlifted to a local trauma center in critical condition. He was reportedly not able to communicate with doctors or investigators and was described as “comatose” over the weekend.

Investigators identified Kaspereen as a person of interest in the case after data provided by William’s cell phone carrier reportedly showed the two had been in contact just prior to the attack.

Warren County Prosecutor Jim Pfeiffer told WFMZ that William had been helping Kaspereen “with a motorcycle sale to a buyer who investigators believe never existed.” He also said the two “were friends” who were “both involved in motorcycle riding.”

According to Pfeiffer, Kaspereen was brought in for questioning and during a break in the interview investigators caught him deleting text messages between himself and William. When questioned why he was deleting the messages, Kaspereen reportedly told police it was because they “didn’t add up to what I told you.” Investigators were able to recover the messages, which reportedly “contradicted his statement about his whereabouts, who he contacted, and the timing of both,” per court documents. Following the interview earlier this month, authorities charged him with one count of tampering with evidence.

Additionally, Pfeiffer said that investigators seized Kaspereen’s cell phone and discovered that before news of the attack had been reported, Kaspereen had performed internet searches looking into the tactics used by police in the area to investigate murders and how money could be withdrawn using a debit card without a pin number.

Police executed a search warrant on Kaspereen’s home and reportedly found a garbage bag that matched the one put over William’s head and a box for a BB gun purchased within the last two weeks that police believe was used in the attack, though they would not confirm if it was being considered the murder weapon.

According to WFMZ, investigators also obtained surveillance camera footage showing Kaspereen throwing William’s cell phone off of the “free bridge” connecting Phillipsburg to Easton. The dive team for the New Jersey State Police reportedly found the phone only hours after it was tossed into the water.

“This case, when you look at it, is really made by forensics and technology,” Pfeiffer told WFMZ.

In addition to the tampering charge, Kaspereen was charged with homicide, attempted homicide, kidnapping, robbery, and burglary.

“At this point, the only motive that would point to, would be robbery, money,” Pfeiffer said.

Kaspereen is facing a maximum sentence of life in prison if convicted as charged.