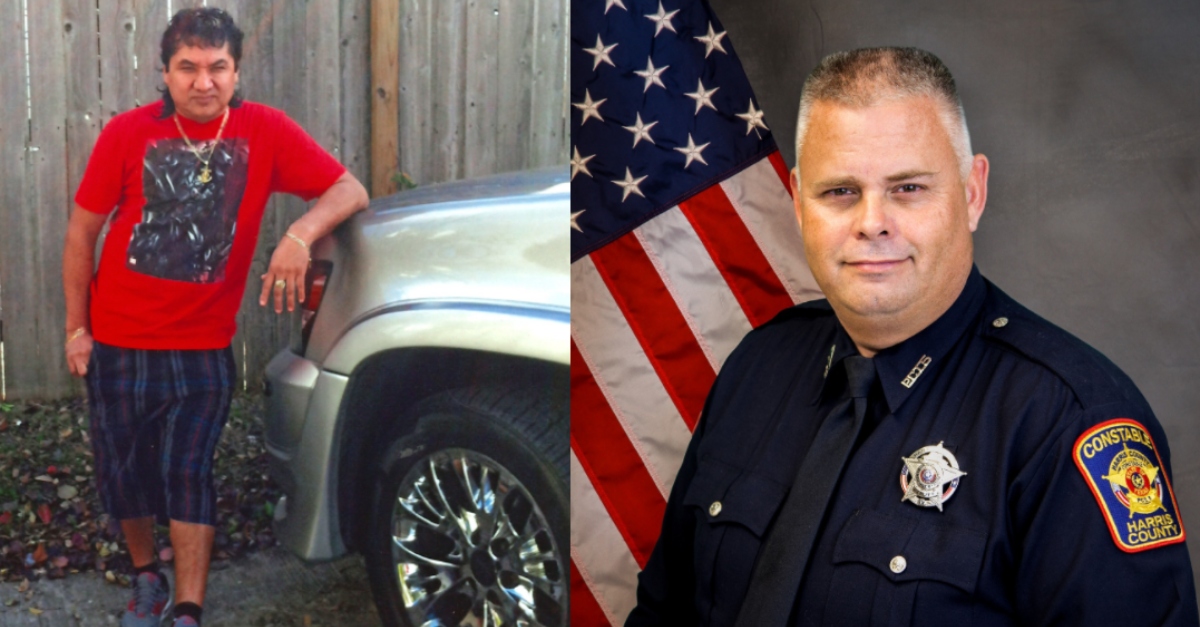 Authorities say they know exactly who fatally shot a constable’s deputy in a “senseless” killing, but now they have to find him. They identified the suspect as Oscar Rosales, 51. Officials released his picture on Monday and charged him with capital murder.

With that in mind, however, Houston Police Chief Troy Finner announced that Rosales has been known to change his appearance.

“We will be putting out some more photos of him,” he told reporters when asked how Rosales changes his look.

It is unclear if Oscar Rosales is even his real name. That is under investigation, Finner said. His common law wife Reina Marquez, 40, and his brother Henri Mauricio Pereira Marquez, 41, were charged with tampering with evidence in connection to the white Toyota Avalon that Rosales allegedly drove. Officials have recovered that vehicle, Finner said.

Authorities warn that Rosales is armed and dangerous.

“He is a bold and incredibly dangerous fugitive,” Ogg said. “He is on the run, and somebody out there knows where he is.” She said prosecutors plan on requesting he be held without bail.

The Precinct 5 Constable has said that Galloway tried to pull over the Toyota for a traffic stop in the 9100 block of Beechnut at about 12:45 a.m. on Sunday, but the driver, now identified as Rosales, exited and repeatedly fired at him. Galloway sustained multiple gunshots and died at the scene, officials said.

“Corporal Galloway did not have an opportunity to defend himself in this brutal attack,” said Constable Ted Heap. “We cannot have people like this on our streets. I do not want to raise my family, my grandchildren, in a county where this type of crime is running rampant.”

“This is senseless,” Chief Finner said. The HPD is taking point on the investigation. He said witnesses claimed the murder weapon was an “assault”-style weapon, though in a press conference Monday he declined to say if they found it or what specific firearm it is.

Galloway joined the constable’s office in 2009, and chose to join the night shift so he could be a field training officer with the toll road division, Heap said.

“There’s a lot of broken up officers who he meant a lot to in their lives,” Heap said.

Galloway is survived by his daughter, sister, and other officers, he said.

Officers ask that anyone with information on Rosales’s whereabouts to contact Crime Stoppers Houston at (713) 222-TIPS or Houston homicide detectives at (713) 308-3600. They are offering a reward for up to $60,000.

[Image of Rosales via Houston Police Department; image of Galloway via Heap]