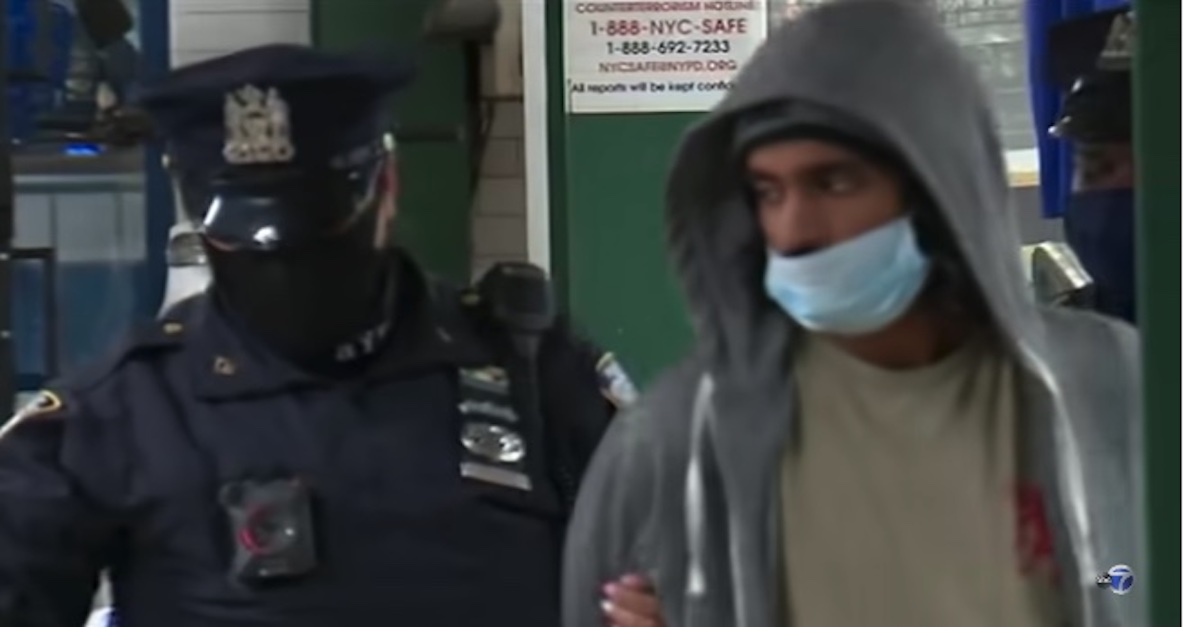 Aditya Vemulpati is seen being taken into custody after pushing a woman in front of an oncoming train on Nov. 19, 2020. (Image via YouTube screengrab/WABC.)

A man who pleaded guilty to pushing a woman in front of an oncoming New York City subway train has been sentenced to eight years behind bars.

Aditya Vemulapati, 26, pushed the victim — a woman he did not know — in front of a train entering the Union Square station. Remarkably, she landed between the rails, and while several train cars passed over her, she survived.

Transit workers and firefighters ultimately rescued her and she was taken to a hospital.

The incident was captured on video. As New York ABC affiliate WABC reported, Vemulapati is seen darting across the platform and shoving the unsuspecting victim onto the tracks. Other people on the platform who witnessed the attack are seen reacting in horror and disbelief.

Subway shove at Union Square 8:30am. Cops say suspect timed push so victim would get hit by train. Somehow she not only survived, but suffered only minor injuries; landed between the tracks. Cops say 24-year-old suspect Aditya Vemulapati is emotionally disturbed and homeless. pic.twitter.com/Qvy8xwgFTk

Vemulapati, who authorities say was homeless at the time of the attack, confessed to trying to kill the woman. He pleaded guilty in June to one count of second-degree attempted murder.

“Today’s sentence makes clear that we will hold accountable those who cause harm in our subway system,” said Bragg said. “We will remain focused on those who harm straphangers just trying to commute to home or to work.”

WABC reported that Vemulapati was “calm” in court on Thursday, reading from a prepared statement in which he commented on the criminal justice system. The WABC story said that Vemulapati was talking about issues unrelated to his case, and the judge cut him short and asked him to focus on his sentence and the particular crime to which he pleaded guilty.

The television station said that the victim was not in court, but Vemulapati apologized to her anyway.

Bragg told WABC that the video captures every subway rider’s worst nightmare but added that such crimes are rare.

“It is something that is sad, tragic, criminal and for which we sought and have accountability, but thankfully that is not the experience that New Yorkers are having and so we’re working every day to make sure that things like this do not happen and when they happen, people are held accountable,” Bragg said.

According to NYPD statistics, transit crime was up nearly 41% in June compared to the same time in 2021.