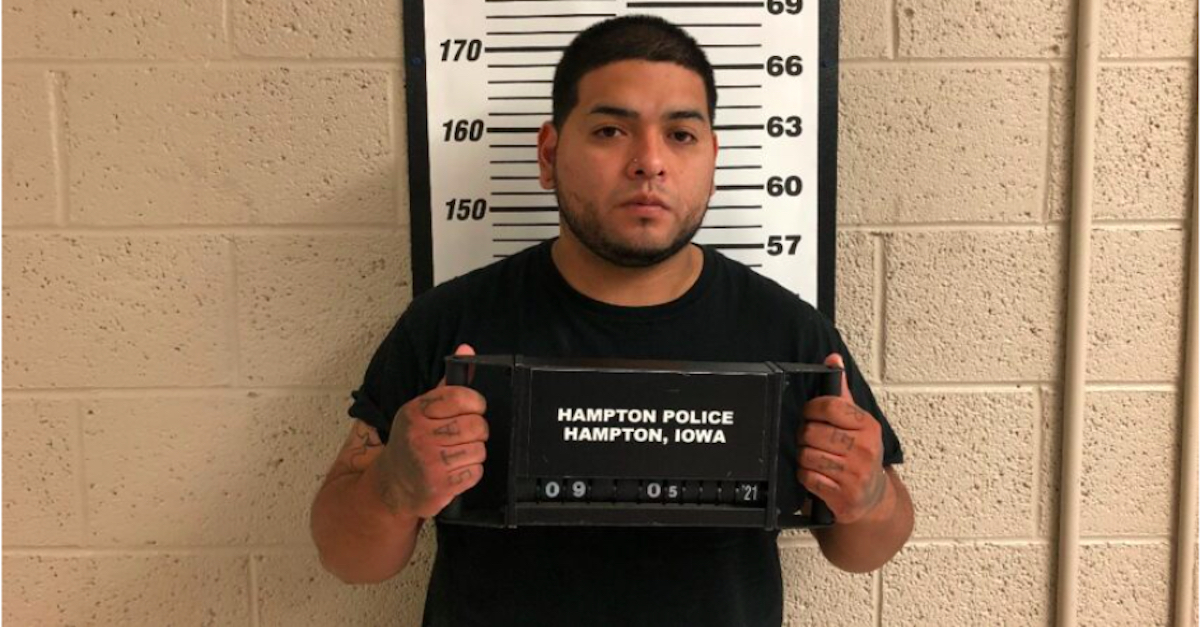 According to a criminal complaint and affidavit filed in Franklin County District Court, Jhonny Junior Salvatore Suarez Rivera on Aug. 1, 2020 agreed to take care of his girlfriend’s son, and he was the sole caretaker for the toddler beginning at approximately 6 a.m. that morning.

Later that afternoon, at approximately 3:45 p.m., Rivera took the child—whose name has not been released to the public because of his age—to Franklin General Hospital because the child “had a medical emergency,” the affidavit states. Doctors and medical personnel attempted “life-saving intervention” but were unsuccessful. The boy was ultimately pronounced dead a short while later at approximately 4:50 p.m., authorities say.

Citing what they called the suspicious nature of the child’s injuries, hospital personnel called the City of Hampton Police Department to report the toddler’s death.

Two days after the young boy died, on Aug. 3, Dr. Michele Catellier of the Iowa State Medical Examiner’s Office conducted an autopsy and determined that the toddler’s manner of death was a homicide and the cause of death was “multiple blunt force injuries.”

Hampton Police Captain Mark Morrison said that in an interview with detectives, Rivera “admitted that he had been a caretaker of [the child] for the last year and that he was watching [the child] on the day of his death.”

Morrison noted that Rivera’s answers to questions from detectives failed to explain how the child ended up being hospitalized and dying.

“Rivera was unable to provide any explanation for the [the child’s] injuries other than possibly choking on a piece of chicken and throwing a tantrum,” the affidavit stated.

Police said Rivera was charged with first-degree murder because he allegedly “had malice aforethought, and committed an assault and showed an extreme indifference to human life” that resulted in the death of his girlfriend’s son. He is also facing one felony count of child endangerment resulting in death.

He was taken into custody on Sunday and is currently being held in the Franklin County Jail.

As previously reported by Law&Crime, a caretaker in Pennsylvania last week was sentenced to nearly 50 years behind bars after being found guilty of murdering a 2-year-old boy who was in her care when police found the child starved and beaten in March 2017.

Court of Common Pleas Judge Glenn B. Bronson handed down a 47-year sentence to 27-year-old Jedayah Nesmith, who earlier this month pleaded guilty to charges of third-degree murder, endangering the welfare of a child, and abuse of a corpse in connection with the death of Azim Jones-Fearon.

Nesmith’s ex-boyfriend allegedly told police that he saw the boy’s body after Nesmith asked him to come to her apartment and then offered him $1,000 to dispose of the toddler’s body.

An autopsy performed by the Philadelphia Medical Examiner’s Office determined that the child had likely died from “numerous physical injuries to the head and body, in addition to starvation and dehydration,” while noting that the toddler had also ingested antifreeze, which was still in his system at the time of his death.

Read the Rivera complaint and affidavit below.