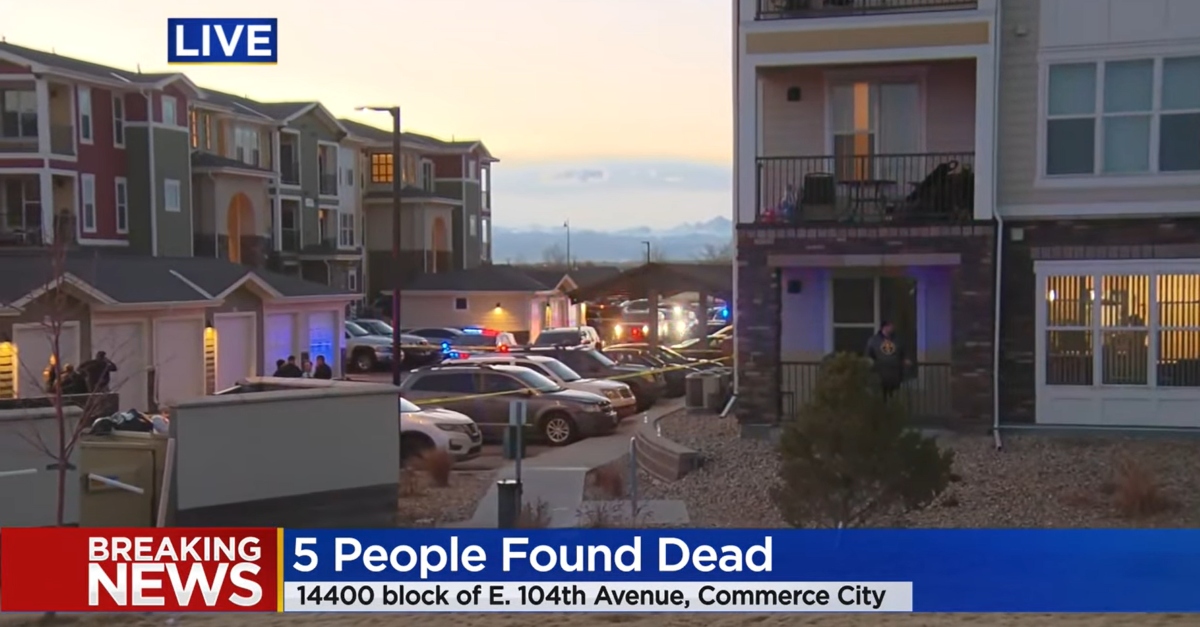 The five people who died in a Colorado apartment this weekend died from taking fentanyl, believing it was cocaine, says the local district attorney. An adult woman and 4-month-old baby were found alive inside the apartment.

“The evidence suggests that the five people who died last night died from a drug overdose and that the drug overdose was fentanyl,” Brian Mason of the 17th Judicial District said, according to KMGH. “It also suggests they probably thought they were taking a different drug and didn’t know that it was laced with fentanyl.”

He voiced concern that this could be part of a tainted batch still making its way through the community.

“It is the nightmare scenario of the dangers of fentanyl,” he said. “…There are other people out there who might have drugs from that same batch or have drugs from the same dealer who could take those drugs tonight. And we have more deaths. It’s a terrifying public health, public safety crisis.”

He declined to say if anyone will get charged with providing the drugs, saying the investigation is ongoing and complicated by the fact that the victims are dead.

“We can’t interview them, ask them where the drugs came from, and that makes these cases very challenging,” he said, according to the Denver Post. “And quite honestly, the drug cartels know that when they are distributing these drugs.”

District Attorney Brian Mason out at the scene tonight. He stated “no drugs are safe right now.” Mason also stated the five people found dead believed they were taking a different type of drug — but what they actually ingested was possibly laced with fentanyl. @KDVR @channel2kwgn pic.twitter.com/v7vmacSUlA

Three women and two men were found dead Sunday afternoon in Commerce City, Colorado, with a female adult survivor and living 4-month-old child, authorities have said. Investigators initially checked if the cause might have been something else, including airborne hazardous chemicals. Cops did not identify the people who died.

UPDATE: CCPD just told us investigators are still not allowed back in the unit that is on the third floor. They want to make sure the substance isn’t dangerous or airborne to others going inside the apartment. @KDVR @channel2kwgn pic.twitter.com/9aNwZzsZaK

Police are waiting for the apartment to be cleanly swept — in case of hazardous material — before the go in to investigate. Chief Nichols stated they don’t want to send officers in there is hazardous conditions inside. @KDVR @channel2kwgn

Neighbor Ian Scott, 31, who lives next door to the apartment in question, said he heard screaming, according to The Denver Post. He found a woman outside holding a baby and speaking on the phone, he said. She looked “high as a kite” and was distraught, he said. He said she told him she gave a drug used to reverse overdoses to a man in the apartment. Scott said he looked inside and saw three bodies.

He told the newspaper that he heard what sounded like a party in the apartment on Saturday night until around midnight, with music and thumping.

Authorities have said that the baby and the woman are expected to be fine.