‘He Had Blood Coming Out of His Nose and Mouth and His Eyes Were Open’: 13-Year-Old Ohio Boy Allegedly Beat Neighbor’s Toddler to Death 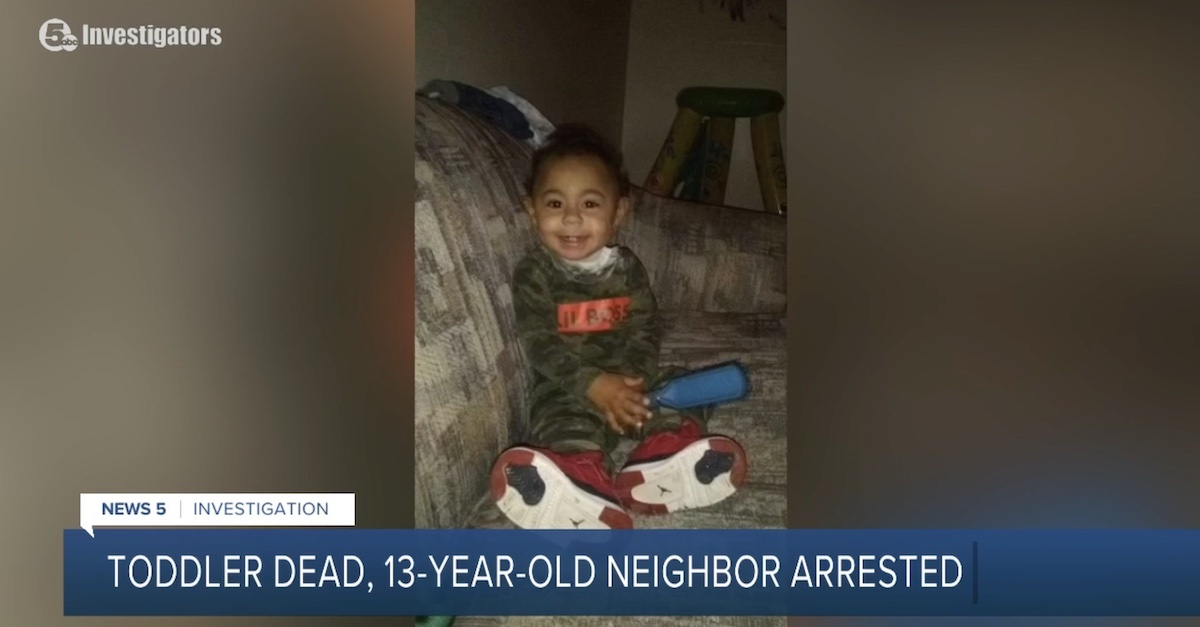 A 13-year-old boy in Ohio was arrested after he allegedly viciously beat a family friend’s 23-month-old baby to death in his home last week, Cleveland ABC affiliate WEWS-TV reported. The toddler was later identified by his mom as Jessie Webber.

According to the report, officers with the Lorain Police Department on Dec. 8 responded to a call about an unresponsive child at a home located in the 1600 block of East 30th Street just before 8 p.m. Upon arriving at the scene, police reportedly found Emergency Medical Services paramedics at the home trying to resuscitate the child, who was not breathing. The child was rushed to Mercy Hospital where doctors attempted life-saving treatment, but the baby was pronounced dead shortly after his arrival.

The child’s mother, Heather Banbury, told WEWS that she had only left her son alone with the 13-year-old for a brief time while she went to the teen’s home—located just a few houses away—to pick up food. She told the station that she returned home to find all of the lights had been turned off. The teen reportedly said it was because her son was sleeping.

“I felt something was wrong and when I cut the light on I saw him and he ran after I asked him ‘Why? What did you do?” Banbury reportedly told WEWS. “And he said he was play fighting.”

She said her son was unconscious and covered in blood.

“He had blood coming out of his nose and his mouth and his eyes were open and he wasn’t conscious,” she reportedly said.

Lorain Police Det. Chris Colon reportedly said the teen “physically assaulted” the baby while his mother was out.

Banbury told WEWS the teen got angry after young Jessie threw a toy dinosaur that struck the older boy.

“He had to stomp on him,” she added. “His shoe print was on [Jessie’s] chest and part of his stomach.”

According to the report, Banbury said the teen was “like part of her own family” and had never previously shown any aggression towards her children. A spokesperson for the police department reportedly said the teen did not have any disciplinary history with law enforcement agencies.

The Lorain County Coroner’s Office on Friday reportedly said it may take several weeks for medical examiners to conclusively determine the baby’s cause of death.

According to Heather’s mother, Tammy Banbury, when her daughter came home and turned the lights on, the teen boy ran from the scene. According to a report from The Chronicle Telegram, the teen was reported missing following the incident, but was located and taken into custody.

“When she went in, the boy told her that Jessie was sleeping and when she turned on the light and she seen, he ran,” Tammy told the outlet.

The teen is currently being held in the County Juvenile Detention Home where police said he will remain until he is formally charged with Jessie’s murder.

“I’m at a loss for words right now, because I don’t understand. I don’t understand how a 13-year-old can do that to a 1-year-old,” Tammy reportedly said. “The little cousins are confused a little, they don’t understand. His sister is — she’s nine so she’s trying to get through the best way she can. His aunts and uncles—it’s not good—we’re all just lost and heartbroken.”