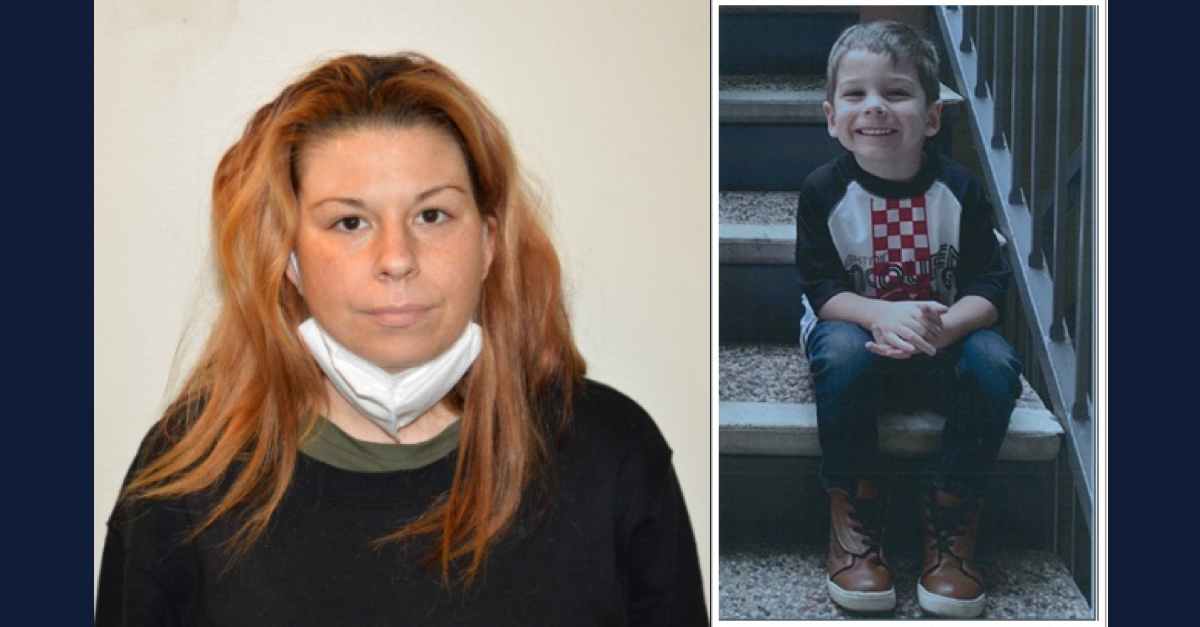 Danielle Dauphinais in a booking photo (left); Elijah Lewis in a picture taken in May 2020 (right) (photos via New Hampshire Dept. of Justice)

A New Hampshire woman suspected of killing her son and trying to enlist others to lie to officials about his whereabouts has been formally indicted.

Danielle Dauphinais, 35, has been indicted on multiple charges in connection with the suspected murder of her son Elijah Lewis, 5, in Merrimack, the New Hampshire Department of Justice announced.

“On April 15, 2022, the Hillsborough County Grand Jury – Southern District returned indictments charging Danielle Dauphinais with one count of first degree murder for purposely causing the death of Elijah Lewis; one count of second degree murder for causing the death of Elijah Lewis recklessly with extreme indifference to the value of human life; and three counts of tampering with witnesses,” a press release from Attorney General John M. Formella said.

Elijah’s remains were found in October in a wooded area off of a Massachusetts road after a 10-day search. Officials determined that the boy died from “violence and neglect, including facial and scalp injuries, acute fentanyl intoxication, malnourishment and pressure ulcers.”

Dauphinais and her boyfriend, Joseph Stapf, 30, were arrested in New York as the search for Elijah was underway.

According to court documents, Dauphinais “did recklessly cause the death of Elijah Lewis, under circumstances manifesting an extreme indifference to the value of human life” at some point between Sept. 27, 2020 and Sept. 24, 2021.

Dauphinais also allegedly tried to get family members, including her aunt, and others to lie to investigators about Elijah and his possible location.

On Oct. 14 Dauphinais “did purposely attempt to induce or otherwise cause Tracy Dauphinais to testify or inform falsely” by instructing Tracy to tell investigators that Elijah was with her, “when in fact he was not,” the indictment says. On that same day, Dauphinais allegedly “did purposely attempt or induce or otherwise cause Joanne Stapf to withhold any testimony, information, document or thing” by telling her not to talk to child protective services about Elijah.

Also on Oct. 14, Dauphinais allegedly told Bruce Scherzer, a family friend also known as Bruce Rolland, to lie to child protective services and tell them that Elijah “was with him, when in fact he was not.”

Although the indictment does not specify Joanne Stapf’s relationship to Joseph Stapf, local reports identify her as his mother.

According to a Boston Globe report published about one month after Dauphinais and Stapf were arrested, Dauphinais had texted an acquaintance that she wanted Elijah “gone” and compared him to serial killers such as Ted Bundy and Jeffrey Dahmer.

“It’s so sad but I have no connection with this child,” Dauphinais reportedly texted Erika Wolfe in June of 2021. “His father took him at the age of one and never returned him until last may 2020. He’s been getting worse and worse. I want him gone. I can’t handle it anymore.”

According to Wolfe, Dauphinais started messaging her in response to a Snapchat post in which Wolfe was discussing her teenage son’s behavioral issues. Wolfe and Dauphinais had known each other as teenagers but hadn’t seen each other in years, Wolfe told the Globe.

Wolfe said that she had forgotten about the text exchange until October, when Elijah’s disappearance started making headlines. She told the Globe that while she was surprised by some of the comments, she thought Dauphinais was just venting her frustrations. She also said that she thought the state’s child protection agency had been checking in on Dauphinais and Elijah.