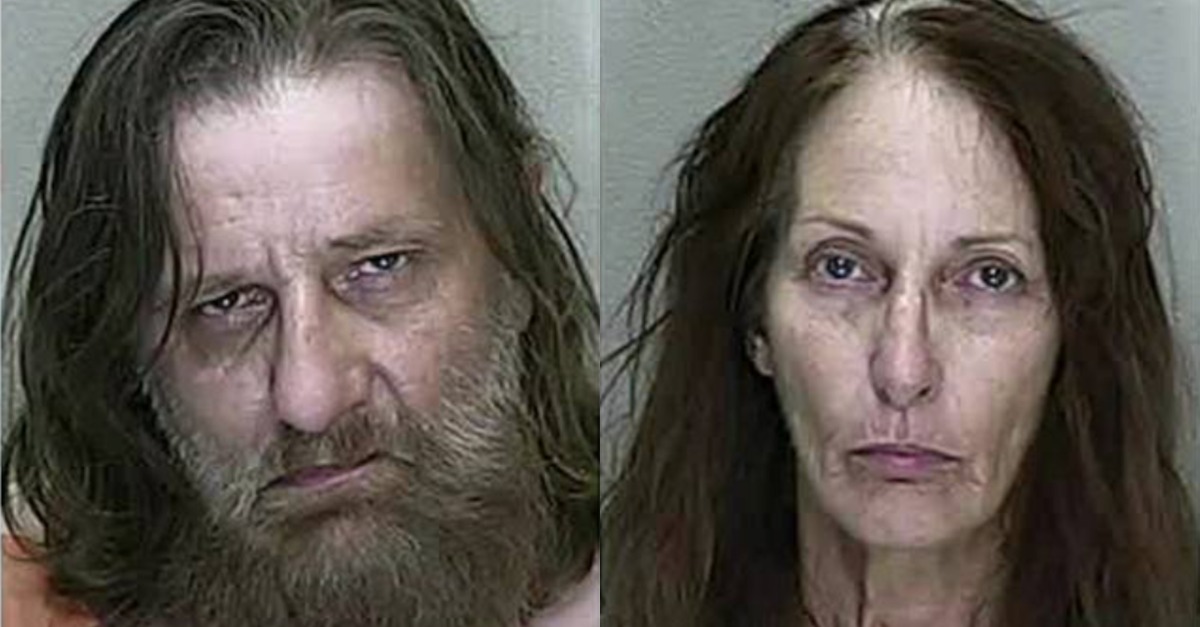 A Florida man and woman were convicted of murdering a government witness on Thursday morning after eight days of trial in federal court.

That witness was poisoned to death with intense doses of drugs–in an effort akin to overkill–and then brutalized before the defendants’ slapdash effort to cover their tracks.

David Chappell Fey, 57, and Shari Lynn Gunter, 58, were each found guilty by separate juries, according to a press release from the U.S. Attorney’s Office for the Middle District of Florida.

According to a superseding indictment filed in January of this year, the couple were charged with eleven counts related to the murder of the witness and numerous drug-related charges. The document also notes that both defendants have a history of criminal convictions related to their longstanding drug-selling business.

Earlier this year and prior to the somewhat unusual circumstances of trial by two juries, Fey pleaded guilty to seven additional counts of distributing methamphetamine.

For the murder convictions, each of the defendants face a mandatory minimum sentence of life in federal prison.

During trial, jurors heard that Fey and Gunter lived together in the small, unincorporated community of Summerfield, Fla. where they had a long history of providing drug buyers with methamphetamines and other controlled substances.

Eventually, authorities planned something of a sting operation. But those efforts eventually went horrible, sideways and awry.

Federal agents convinced a 31-year-old woman and mother of three, only identified as K.B., to cooperate with law enforcement. Previously a normal customer, the woman conducted a so-called “controlled buy” of $40 worth of methamphetamine from the couple in January 2016.

But control of the situation spiraled out of authorities’ hands.

The defendants soon learned that their customer was acting as an informant for the federal government and conspired to murder her so as to make sure she wouldn’t be able to testify as a witness during their upcoming trials on drug distribution charges.

The indictment describes the murder conspiracy in the following terms: “[Fey and Gunter] did knowingly and willfully conspire with each other and other persons, both known and unknown to the Grand Jury, to unlawfully, deliberately, maliciously, and with premeditation and malice aforethought, kill K.B., with the intent to prevent the communication by K.B. to a law enforcement officer and judge of the United States of information relating to the commission and possible commission of a Federal offense, to wit: conspiracy to distribute and distribution of methamphetamine.”

The press release offers a more detailed description of that effort:

Specifically, on April 5, 2016, Fey and Gunter made up a “hot shot”—a syringe containing a lethal amount of fentanyl and methamphetamine and provided it to the victim. When the victim injected herself, she immediately collapsed. Gunter then dragged the victim outside, kicked her in the head, and placed her in the passenger seat of her car. As the victim sat helpless in the vehicle, Fey and Gunter administered a second, fatal dose of fentanyl and methamphetamine, causing her death. They then drove her to a cemetery in Oxford, Florida, and staged the scene to look like an accidental overdose.