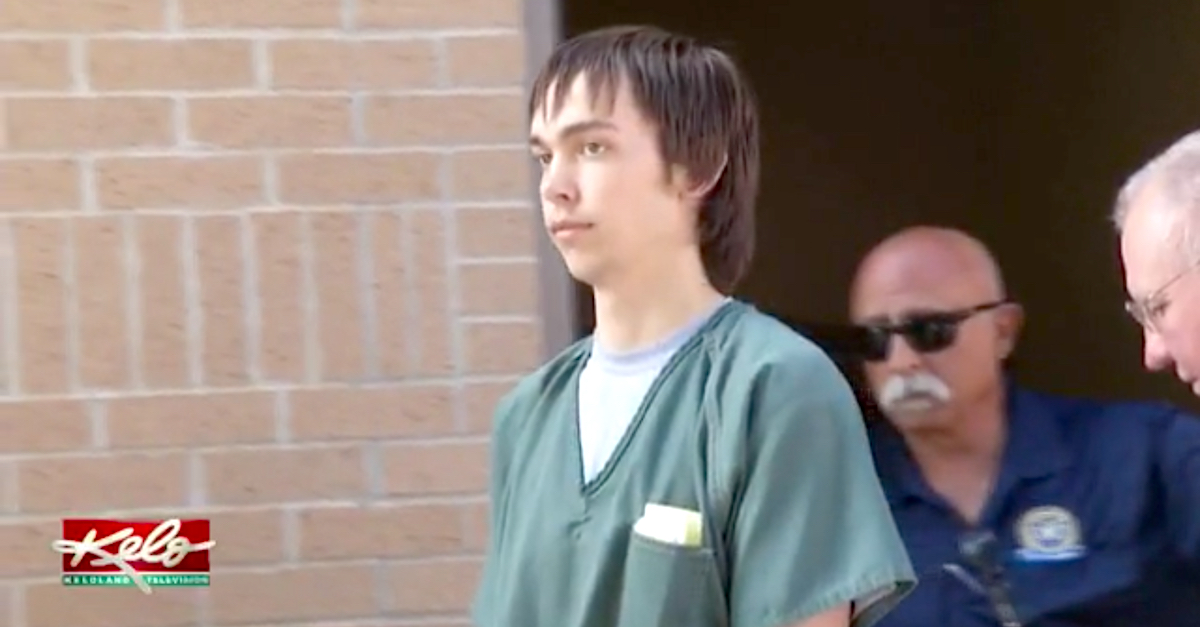 Mason Buhl appears in a screengrab from KELO-TV.

Six years after shooting his high school principal during the school day and receiving only probation and a suspended sentence, a South Dakota man is facing serious prison time after newly filed rape charges triggered a reopening of his 2015 school shooting case, the Mitchell, S.D., Mitchell Republic reported Tuesday.

Mason Buhl made national headlines when, at the age of 16, he ran into the Harrisburg High School principal’s office with a handgun and fired a single bullet at Kevin Lein, striking him in the right arm and the chest. After protracted legal proceedings that lasted nearly two years, Buhl pleaded guilty to one count of first-degree attempted murder and was sentenced to 25 years in prison. However, citing to his mental health issues and “the belief among attorneys that Buhl can be rehabilitated,” Judge Brad Zell suspended the sentence in its entirety, contingent upon Buhl remaining on probation for 15 years without incident, the Argus Leader reported in 2017.

“If you exhibit any — any — violent behavior once so [sic] ever I will be quick from any judgement to remove you from society,” Zell told Buhl during his sentencing hearing, per the Argus Leader.

But less than one-third of the way through his term of probation, Buhl, now 22, was charged with second-degree rape earlier this month, meaning his suspended 25-year sentence is back on the table. Under South Dakota law, second-degree rape is a class 1 felony defined as sex that occurs through the use of force, coercion, or “force threats of immediate and great bodily harm.”

According to the Mitchell Republic, court documents filed in Hughes County Court state that the alleged rape happened sometime between June 2020 and July 2021.

While the name of the female victim in the case remains under seal, the Republic reported that she filed a protective order against Buhl in Minnehaha County that revealed more details about their relationship.

In a two-page application, the victim claimed that Buhl had repeatedly reacted violently when she rejected his “drunken sexual advances” and cited several instances where he allegedly punched her in the stomach.

She also claimed that Buhl’s conduct led her to fear for her life.

“He also recently bought knives on eBay . . . and would mimic stabbing people,” she reportedly wrote. “I fear he will further physically abuse me or kill me based on his previous actions and history towards me.”

She said she was finally able to “escape” Buhl on July 2, when she was able to arrange for a family member to pick her up from his home.

In addition to the rape charge, the Republic also said that Buhl is facing a possible probation violation in connection to a domestic assault case in Lincoln County.

Per the report, the Sioux Falls Police Department released a previously confidential document stating that Buhl was the suspect in a simple domestic assault case against the same female victim. She told officers that Buhl had abused her for three years, but cited to his probation status in refusing to reveal any bruises or give additional details that may have incriminated Buhl. No formal charges have been filed in the Sioux Falls matter as of Tuesday.