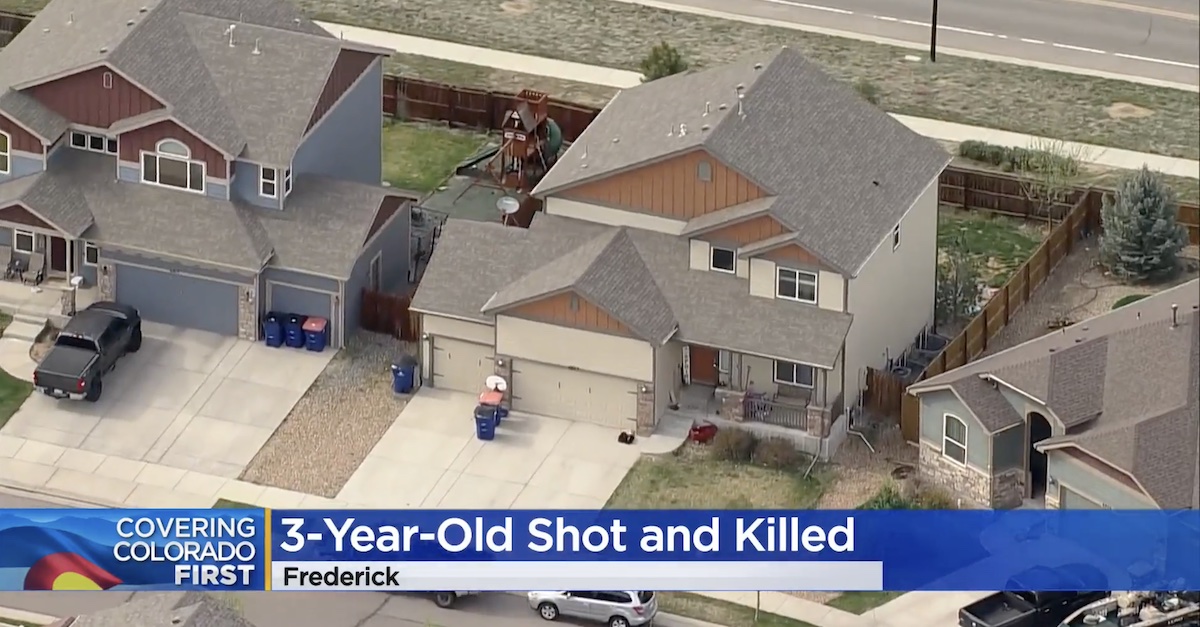 An aerial shot of the neighborhood where the tragic shooting occurred.

Nearly two weeks after a 3-year-old girl was shot inside her own home on Mother’s Day morning and lost her life, the toddler’s parents face several misdemeanor charges for unlawful storage of a firearm.

The Weld County District Attorney’s Office announced on Thursday morning that Elaine Eskam and Sgt. Brett Eskam, a deputy with the Adams County Sheriff’s Office, have been summoned to appear in court on July 18.

“The Frederick Police Department issued summons to both Elaine and Brett Eskam charging each with six counts of Unlawful Storage of a Firearm, which are class 2 misdemeanors,” the DA’s office said.

According to authorities, a 911 call reported that a shooting occurred inside the Frederick, Colorado home on the morning of May 8, Mother’s Day. Avery Elaine Eskam was taken to a nearby hospital but did not survive.

Police announced that they and Frederick-Firestone Fire personnel responded to the scene around 10:45 a.m. and found the 3-year-old with “life threatening injuries.”

“The child was transported by EMS to a local hospital where she was later pronounced deceased,” cops said.

The circumstances of the shooting were not explained, but the Eskams now face criminal liability for allegedly failing to “responsibly and securely store” the firearm involved in the shooting.

Here’s what Colorado law says about how firearms must and must not be stored under the law:

(a) A person commits unlawful storage of a firearm when the person fails to responsibly and securely store a firearm, as described in subsection (1) of this section, upon any premises that the person owns or controls and the person knows or reasonably should know that:
(I) A juvenile can gain access to the firearm without the permission of the juvenile’s parent or guardian; or
(II) A resident of the premises is ineligible to possess a firearm pursuant to state or federal law.
(b) Unlawful storage of a firearm is a class 2 misdemeanor.

Class 2 misdemeanors in Colorado are punishable by jail time and/or a fine.

Following the victim’s death, the Adams County Sheriff’s Office confirmed Avery was the daughter of one of their own.

“While Sergeant Eskam has been awarded multiple times during his 17 years of service with the Sheriff’s Office, he is a father and husband first, and the impact of this loss is immeasurable,” the statement said.