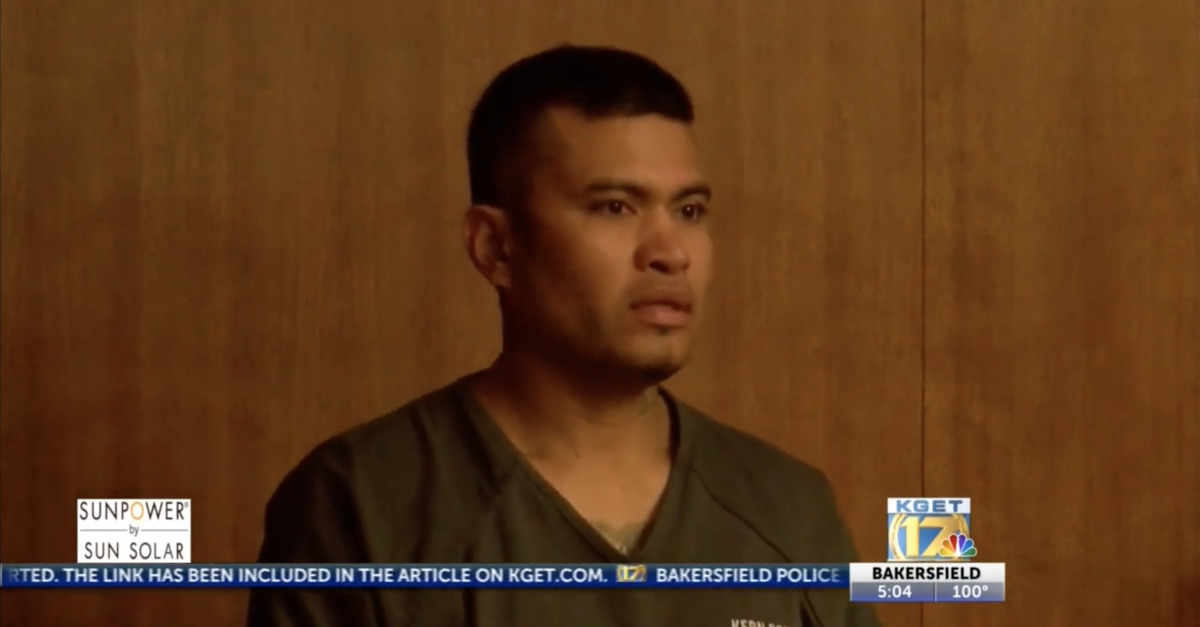 A California man was convicted by a Bakersfield jury late Friday morning for the shooting deaths of his ex-wife and her brother.

Moris Gilmete, 41, was found guilty of two counts of murder in the first degree as well as one count each of recklessly evading a peace officer and carrying a concealed weapon in a vehicle.

“That night he intended to kill, he considered the consequences and then he killed,” a prosecutor said during closing arguments earlier this week. “And now, it’s time for the consequences.”

According to Bakersfield NBC affiliate KGET, the jury began deliberations the afternoon before, but the defendant’s legal culpability was never really in doubt.  The question at bar was the degree of that culpability.

According to KGET, defense attorney Gary Turnbull “conceded” that his client was the gunman who took two lives on the day in question. Turnbull posited, however, that his client was drunk and had not acted with premeditation. That narrative effort, an attempt to secure two lesser convictions on charges of murder in the second degree, ultimately failed.

Trial began Sept. 1, 2022, according to The Bakersfield Californian.

On Sept. 23, 2019, the defendant shot and killed 34-year-old Louise Abraham and 20-year-old Carlos Abraham at an apartment complex on Union Avenue. The violence occurred after an altercation. Three children were in the residence when the awful events transpired sometime after midnight. The children were not harmed.

After the shooting, Gilmete eventually got into a pickup truck and sped away. Tailed by police, the defendant reached speeds of 75 miles per hour on several residential streets before making his way onto Highway 178 where he got up to 85 m.p.h. Then he took an off-ramp that was closed for construction, narrowly missed striking a construction crew, and crashed into another pickup truck on the side of the road.

When he was initially caught, police found a revolver in his truck. His intake interview would prove fatal to his drunken stupor defense.

Gilmete told the arresting officers that he shot the first victim while holding a gun to the person’s head – but that the gun went off on accident. And then, figuring he had nothing to lose, he said he decided to shoot “everyone” else. After killing the two with three or four shots, he said, he searched for more bullets to get rid of the rest of his “enemies.”

But the defendant also said he had been drinking vodka since 9:00 a.m. the day before the shooting and that he believed he was shooting at his neighbors, according to court documents obtained by KGET. He had no memory, he claimed, of shooting his ex-wife and her brother.

A witness at the scene who spoke with the three children said they saw their parents arguing when Carlos Abraham intervened in an effort to protect his sister and was subsequently shot and killed.

During the trial, evidence was provided that cleared up some of the confusion.

Near the end of a get-together with neighbors where people were drinking heavily, Gilmete and his ex-wife began to argue outside; they then went inside the apartment and continued to argue.

Prosecutor Hunter Starr said the defendant repeatedly abused his ex-wife and that she finally had enough when he pulled out his revolver as the party waned, prompting her to call 911.

In a 911 call that was often referenced and replayed, Louise Abraham can be heard shouting: “You’re scaring me with that (expletive) gun.”

The woman’s plea was followed by gunshots and screams.

Neighbors at the time reported hearing a woman dejectedly shouting, “No, no!” followed by more gunshots that extinguished her screams, according to a report obtained by The Californian.

“This was no accident,” the prosecutor said. “This was premeditated, deliberate and willful murder.”

“Guilty as charged, ladies and gentlemen,” Starr went on after dismissing the vodka defense by reflecting on the defendant’s original statements to police after the chase. “You know what to do.”