‘A Major Step’: Our First Look at the Delphi Murder Suspect in Jail Orange After Authorities Confirm Arrest 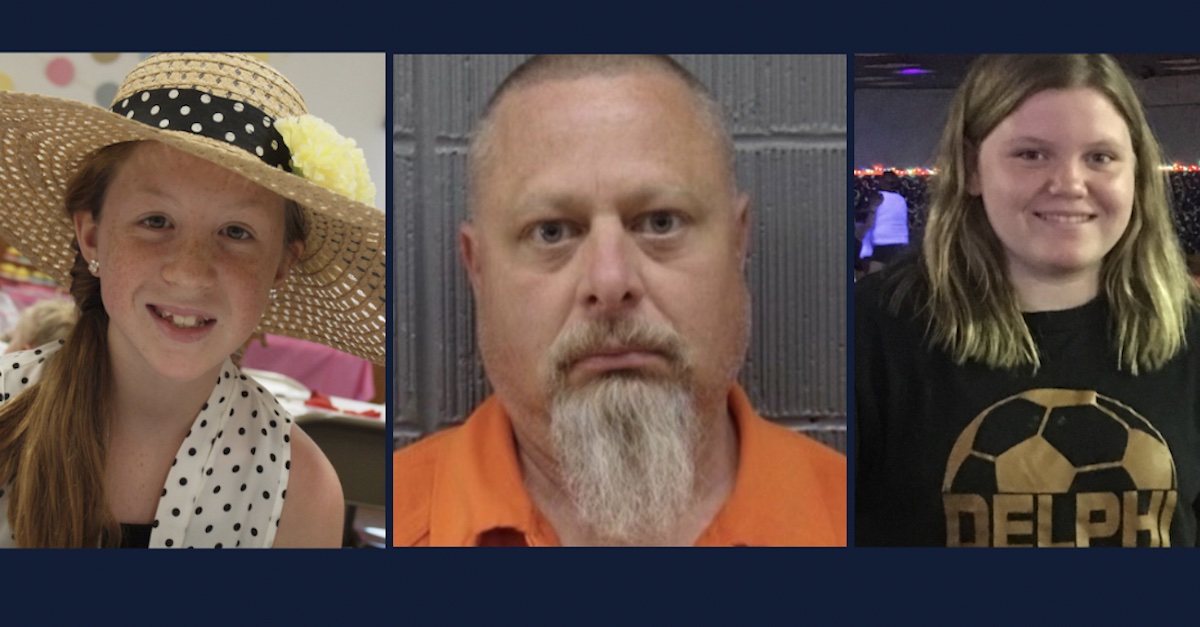 Authorities formally named 50-year-old Richard Matthew Allen as their suspect in the Delphi, Indiana, murders of two teen girls in 2017.

Late last week, news broke that an arrest had been made in the slayings of Liberty “Libby” German, 14, and her best friend Abigail “Abby” Williams, 13. Over the weekend, we got our first look at the suspect. On Monday morning, investigators finally announced that Allen faces two counts of murder.

Authorities did not release specifics on how they accomplished the long-awaited arrest. They did not explain why they believe Allen murdered the girls. A judge sealed the probable cause and charging information, investigators said.

“This investigation is far from complete, and we will not jeopardize its integrity by releasing or discussing documents or information before the appropriate time,” Indiana State Police Superintendent Doug Carter said in a press conference on Monday.

German and Williams were murdered while visiting the Monon High Bridge on Feb. 13, 2017, authorities have said. Their tragic deaths rocked the small community. Delphi is the seat of Carroll County, which had about 20,444 people, according to a U.S. Census estimate from 2021.

“On Wednesday, October 26, 2022, detectives with the Delphi Double Homicide Task Force took Richard Allen, 50, from Delphi Indiana into custody at the Indiana State Police Lafayette Post for the murders of Abigail Williams and Liberty German,” authorities wrote in a press statement. “Allen was transported to Carroll County Jail, where he was being held. On Friday, October 28, 2022, Allen was formally charged with two counts of murder and transported to the White County Jail, where he is currently being held without bond.”

Allen has pleaded not guilty, authorities said. The investigation continues and authorities are still asking the public for any information they might have on Allen or anyone else for that matter.

“Today is not a day to celebrate, but the arrest of Richard M. Allen, of Delphi, on two counts of murder, is sure a major step in leading to the conclusion of this long-term and complex investigation,” Carter said.

#Breaking: Richard Allen is charged with two counts of murder in connection to the deaths of Abigail Williams and Liberty German. The Delphi double homicide has been unsolved since 2017. pic.twitter.com/T8SXML9tWr

Previously reported search warrants showed that the girls lost a considerable amount of blood when they died, with blood likely ending up on their killer’s clothes and hands. It appeared that German and Williams’ remains “were moved and staged.” The killer is believed to have taken a “souvenir from the crime scene.”

In a case stretching for more than half a decade, authorities released compelling but slight evidence that pointed them toward a culprit. Police have said that German, who was said by her grandmother to have enjoyed watching crime shows on television, recorded video and a brief few words from her suspected killer.

“Guys . . . down the hill,” said a man captured in a clip that the authorities say was recorded by the victim. The full recording is reportedly 43 seconds long, but only a small portion has been made public, according to earlier reports from WXIN.

Investigators also released an image of a possible suspect.

You can see the picture and listen to the FBI’s release of the audio below:

[Mugshot of Allen via Indiana State Police; images of German and Williams via the FBI]