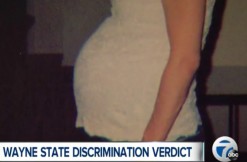 Varlesi said she was discriminated against while interning at a Salvation Army rehab center for college credit.

She was at the pregnant at the time. She says this got her supervisor, another woman, focused on her baby bump. This lady “addressed her obvious pregnancy immediately, ordering her not to drive after dark or in bad weather, questioning her marital status [Varlesi’s fiancé had just left her] and living arrangements and announcing that though she had ‘had relations’ with someone, the men at the rehab ‘can look but they cannot touch,’” the court ruling stated.

The supervisor kept going on about it, even after Varlesi complained to Wayne State. The supervisor admitted during a meeting she told her “repeatedly to stop ‘rubbing her belly’ and to wear looser clothing, and said that the men at the facility were being ‘turned on by her pregnancy,’” according to the ruling.

Varlesi says she got a failing grade in the internship in 2008, keeping her from graduating. Mind you, she had a 3.6 GPA according to a report by WXYZ, an ABC affiliate.

“They pay a lot of lip service to the law and not tolerating any discrimination, but at the end of the day, it’s hollow,” Deborah Gordon told the Detroit Free Press. She’s Varlesi’s attorney. “Now taxpayers have to foot the bill.”

The baby was a boy, by the way.

[image of Varlesi via WXYZ screengrab]
–